You know the phrase about how if you weren't laughing you would cry?  That.

It's a good thing that it's funny how my sister has been here for nearly two weeks and we've seen her and her kids nearly every day and yet I'm certain that we've been unable to complete more than possibly three sentences during that time. It's not that we don't want to talk, and it's not that we haven't had opportunity, it's that there are four kids and boy are they funny.

They're great kids. They are all - she writes with only a small amount of bias - smart, verbal, entertaining, engaging kids. The three oldest boys are all inquisitive and gregarious and loving.  They're just inquisitve, gregarious and loving in three different ways, which pretty much sums up why we haven't been able to speak in complete thoughts.

Natalie is a living doll. She's happy, smiley, curious and beautiful. She entertains herself but will readily let you join in her games.  Her squeals, growls, tongue rolls and shrieks are a hoot and she loves her some Uncle Mark and Grandpa.  She's also taking notes.

Andrew is, as someone pointed out, twice as old as the small boys and he has moments of being able to rise above and use his maturity as a helper. He has begun setting the dinner table with great pride and has learned to use a steak knife this week. He has shown glimmers of truly serving as a role model.  And then there have been those other funny times when he's entered a room where smaller boys were playing and completely disrupted every molecule in the space, leaving tears and screaming in his wake. He has taught new words that no one wanted their three-year-old to learn and he has puppet-mastered his cousin whenever the opportunity was presented.

Thomas is, well, kind of like a stranger to me in his cousins' presence. I say that without a trace of pride. He has had moments of trying to do the right thing and trying to be flexible, but mostly he has shoved and spit and pushed buttons for two solid weeks now.  My cuddly, gentle, loving boy has rejected his cousin's best attempts at affection and has found a new volume in his voice that we could probably do without. I'm sure my sister and her kids could as well. He has purposely upset to test reactions and has dutifully repeated his brother's vocabulary lessons.

Wyatt, my nephew, has tried. He gives freely with hugs and kisses - trying time and again, even after Thomas tells him NOTHANKYOU. He asks politely for people to play soccer/football/basketball/tackle basketball/croquet with him and isn't deterred by the first "no." He also has done his part to perfect Thomas' button pushing by dutifully screaming whenever Thomas goes looking for a reaction. He has tried out his new words, taught by Andrew, on his mom and laughed gleefully as Andrew coached him through how to totally unravel Thomas.

Thomas playing gently with Natalie on the living room floor for 20 minutes at a stretch, without prompting.

All three boys pretending the playset in our backyard was a ship where each of them had an assignment that required them to work in tandem, for nearly an hour on a cold Saturday morning.

Wyatt asking Andrew for a high-five, after being told by his mom that there should be no more kissing, and having Andrew respond voluntarily with a hug instead.

The boys dressed in their khakis and sweaters for Sunday brunch and all sitting quietly at the table, showing us that they are capable of white tablecloth manners.

Cheering for one another's bowling successes and cooperation in building snow forts.

I have decided it's important to record ALL of this because I think it will help me remember the moments in between the screaming, when they were all giggling together. And, because someday, when they are capable of more extended periods of friendship, we'll want to remind them of how funny they were when they were little and how we wanted to cry but they were so we chose to laugh instead.

Also, when Natalie is in charge of the whole lot of them and they're all doing whatever she tells them, we'll want her to have this story as ammunition.
Posted by Susan 2 comments:

My sister is visiting right now with her two children. We're all enjoying lots of good together time, lots of good food and the cousins are having a big time. Eventually I'll get around to posting more but for now, well, I'm exhausted.

The kids all get along amazingly well considering their ages and the general family dynamics already at play between my two. In fact, they play so well that between three boys and a baby, the volume is generally fairly high. I think, however, most of us have become somewhat immune. Most of us except Great Grandma.  Today she informed us that she has decided to leave her hearing aids at home when she's coming to where all the small people are playing. She announced that after the ruckus on Friday night she just doesn't feel like she needs to hear them any better.
Posted by Susan 2 comments:

Things you will NOT hear me say today

3. I am a very good and effective parent between the hours of midnight and 6 a.m.

5. It makes me proud when you ask your brother whether he "just rolled into town on the stupid train?"
Posted by Susan 1 comment:

We've had a little snow here in the last few days.  OK, kind of a lot of snow. And it's kind of cold. The good news is that we've had fun sledding as a family - apparently Mark and I sledding together in one plastic toboggan was entertaining for all involved - and the boys have left tracks in every corner of the yard. Eventually, however, it's time to just hunker down and entertain ourselves indoors where it's warm. Good thing we live with these two.

It's a little long but there just wasn't a logical edit point before I ended it. However, if you're inclined to skip forward please do check out the 1:19 mark, where for some inexplicable reason Thomas decides he needs more leverage.

Right after this filming, Mark demonstrated his ability to do a handstand. There's more cold in the forecast so we're considering adding that to the act later this week.  Stay tuned.
Posted by Susan 3 comments: 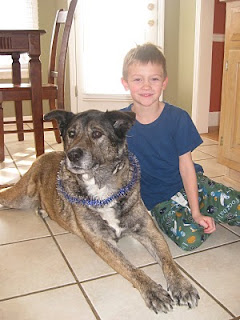