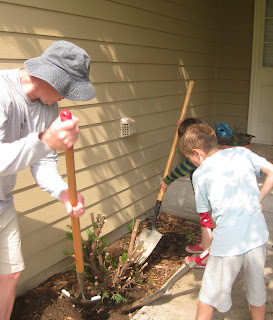 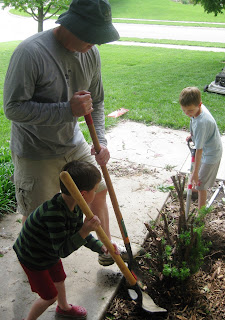 I included this last shot to document that I was indeed chatting with a neighbor while the boys finished the job. I did my part by dragging it all out to the curb tonight. If the trashmen take it all tomorrow morning then this job has been a success.
I love my team!!!﻿
Posted by Susan 1 comment:
Labels: Andrew, House of Hondo, Thomas

We at House of Hondo are so excited by warmer weather and longer days. The boys rush to get dressed so they can play outside before school and they rush home to jump in the trampoline after school. The birds are chirping, the sun is shining and things are grand.

We've reached a phase in our house where the boys "sleep in." While the definition of "sleep in" is relative, we've become accustomed to 7:15 or 7:30 for Thomas and even 7:45 for Andrew. That leisurely hour feels purely luxurious after the early years of Thomas' life where he was regularly up and at 'em by 6 a.m. He's the reason we instituted the Do Not Come Out Of Your Room Until The Clock Starts With A Seven rule.

After a few consecutive mornings of early wakeups, and the resulting grumpy evenings,  I have taken matters into my own hands. Genius or desperation?  You be the judge: 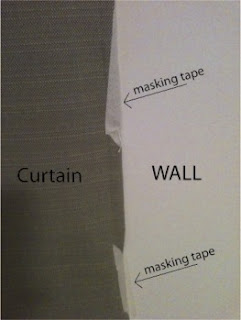 That's right. I taped their bedroom curtains to the walls last night. They already have blackout lining but that pesky gap between the curtain and the wall seemed to be giving us fits.  I've taken care of that issue in a super klassy manuever involving a roll of masking tape. Mark was sure they would notice AND that it wouldn't work. It turns out to be very fortuitous that theirs are the only two rooms in this house that I haven't painted so their contractor white walls match that klassy tape pretty well and they were none the wiser.

Everyone stayed in their own beds until 7:20 a.m.  I'm thinking that this round goes to Mom.

As someone who has recently turned down an invitation to see the Princess Diana traveling exhibit that's in Kansas City because it just doesn't trip my trigger enough to spend a precious Saturday morning there, I have to admit that I got a bit sucked into last week's Royal Wedding. I didn't think I would be interested but once it was happening I found myself mesmerized by the footage and wondering why I don't get to be Kate Middleton.

Part of the appeal was that the boys (the two small ones) were just as interested as I was.  As is typical, and totally wonderful, they were intrigued by different aspects of the whole circus. Next time you see Andrew, quiz him about the who, how and when of the ascension to the throne. He's got it covered. He also knows how old the Queen, Prince Charles and Prince William are and he thinks Her Majesty looks pretty good for eighty-five.

Thomas was kind of just into the William and Kate part of the story and somehow became aware that William is a helicopter pilot. He, if quizzed, will share that Kate is now Katherine because she's a princess after she wore that pretty dress.

They watched the coverage at Buckingham Palace with me as we prepared for school and that lead to the creation of White Wing Palace underneath our deck later that afternoon. Sadly, it rained before I thought to photograph the signage Andrew made for their backyard castle but it had a crest and everything. Their palace was furnished with everything that lives in our backyard that isn't nailed down; plastic picnic table, sand table, mini-trampoline, soccer net, wheelbarrow, etc. They spent the better part of an hour horsing these things around the yard. While they were in the palace they were both Knights.  Beautiful stuff that I couldn't dream up if I tried.

The part I did get documented was Thomas' school outfit for the big Royal Wedding Day. His teacher, the fabulous Miss Lori, planned a day of royal festivities, complete with Burger King crowns for everyone,  and invited all the kids to wear their best princess or prince attire. We're a little short on princess dresses around here but Thomas' research into Prince William left him inspired.

Thanks to Uncle Jeff and Aunt Stephanie we do happen to have a flight suit in the closet and it would be an understatement to say this was a hit at school. He wore it all day long and would have worn it to dinner with little encouragement.

It's a little bit of a letdown to know that William is now officially taken, and while Harry is still technically available, I think I'll stick with HRHs Andrew and Thomas.
Posted by Susan 2 comments:
Labels: Andrew, school, Thomas
Newer Posts Older Posts Home
Subscribe to: Posts (Atom)