So, this is going well

When you make the decision to send your children into a daycare situation, you have to be comfortable with your selected "school's" strategies. (I like to call it school. It makes it sound important.) Our kids' school came highly recommended by many people and has a great reputation in this town. We happened to have some close friends who had sent their kids there and they, to this day, can't say enough good things about the school and their philosophy. These people have teenagers who are seemingly well adjusted, are as polite as tweens and teens ever are, can eat with utensils and, most importantly, are all proficiently using the toilet.

The potty training technique at our kids' school is legendary. It's full of positive reinforcement, it has phases and levels and variations and supposedly always works.

I've been hiding from Thomas' teacher - the potty traning guru - for almost three months. You see, the "wearing training pants" phase typically begins around the kids' second birthday, but we just didn't think T was ready. So, like any intelligent professional woman would do, I whined and pleaded about how I didn't want to buck the system but wanted a reprieve for my kid. His language isn't exactly advanced and it would seem that having the ability to tell us he needs to potty would be a prerequisite for potty training. That logic combined with the fact that he's basically been flunking every level and phase and variation of the system has bought us a few months. Eventually, though, if you send your kids to school there you kind of have to get on board with the plan.

Today was the day.

Last night in preparation, we got out the training pants and, per my sister-in-law's suggestion, I made a fool of myself dressing a stuffed Elmo in underwear and plastic covers. Elmo whispered in my ear that he needed to make a potty. We rushed him to the bathroom. Elmo earned an M&M and a sticker as well as crazy accolades from mommy and daddy. We had T in such a lather that he wanted to put the pants on right that minute.

(Meanwhile, Andrew was lurking around and muttering, "It's not that cute that Elmo is pretending to wear underwear. Elmo doesn't even actually wear plastic pants. Elmo can't eat M&Ms. That sticker is going to get stuck on Elmo's fur.") Just call him Mr. Helpful.

It came time to get dressed this morning and Thomas was ready to wear those pants. I, however, didn't want to actually put them on him until we were ready to bolt for the car. I figured we had about seven minutes from the time he put them on until the time he had his first accident so I was anxious to hand him over to the "guru."

When we arrived at school he proudly told his teachers, "big boy pants" and waved goodbye. I crossed my fingers and headed to work.

Fast forward to this afternoon. He was in "potty" when I arrived and the teacher with him asked if I was taking him straight home. I told her we were going to Andrew's swim lesson and she made the executive decision that he would leave school in a diaper. 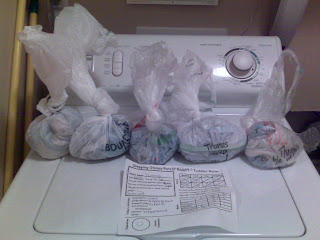 That's right. Thomas went through five pairs of traning pants with plastic covers today between 8:30 a.m. and 4 p.m. and he was in a diaper for two hours of that while he napped.

This is going swimmingly. If you need me anytime in the next year, I'll be doing laundry.