The boys were at my parents’ house earlier this week and my mom found an old science riddle book that they (all) found entertaining. She read them nearly every question in the book, which were all science-based in some way, and most also had some little play on words or funny pun worked into them.

Thomas was really into it and really wanted to be able to come up with an answer. He was as eager a student as he knows how to be and was going with the premise that if he tossed out a bunch of answers, it improved his chances of one sticking. Andrew was less interested in tossing out just any answer and was thinking with furrowed brow about his responses, priding himself more on accuracy. That’s why his reaction when Grandma posed this riddle was so funny to me:

“What has six legs and flies south for the winter?”

Without hesitation Andrew said, confidently, in a way only he can, “Three geese!”

STYLE POINTS, FOR THE WIN.


p.s. the answer is Monarch butterfly…
Posted by Susan 1 comment:

Dear Mark,
I recently mentioned here that you had a man cold and that it was debilitating you. I was using your sickness for attempted humor. Now that I have contracted the man cold I can clearly see the difference. It's bad. I am sorry. As soon as my speaking voice returns, we'll get a good laugh out of this video.

Starting where I am

We’re 13 days into 2012 and for 10 of those I have been meaning to update the ol’ blog site with a well-crafted post. I need (want) to write about our holiday celebrations that were replete with family and fun. I need to document our amazing post-Christmas vacation to the happiest place on earth with dozens of photos that should really be narrated before I forget the details (and the hilarity) that can surround a traveling party of 10. We truly had so much fun. 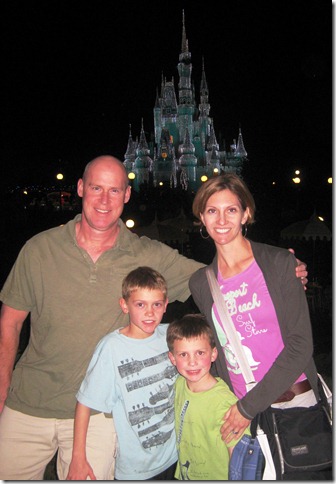 However, as my wise mother-in-law recently reminded me, “Life is what happens to you while you’re busy making other plans.”  I also recently read that the best way to move forward is to just start where you are. How profound. So, here we are.

Since we returned from Florida we’ve been embroiled in Life. We re-acclimated to school and work, which was easier for the kids than me, and we’ve also been running an infirmary.Our sweet Madeline dog had a spleenectomy last week to get things rolling and since she came home we’ve been busy keeping her off the stairs while she heals. That’s a full-time job because her interest in said stairs has quadrupled since they’ve been taboo. We heard from the veterinarian today that the tumors they removed defied the laws of probability and were benign. We feel good about electing to have the surgery and when the kids want to know why their college accounts aren’t fully-funded we’ll remind them about the extra years we bought with the best last dog we've ever owned. (I jest, I jest. We love her and are very pleased that she seems to feel better than she has in months.)

Last Saturday at 9 p.m., when the kids should have been in bed as I was wrote a brilliant trip recap, I was instead watching Chopped and the boys were roughhousing in the basement. They were fighting over a football and were in a standoff on opposite sides of a chair. At the exact moment I opened my mouth to intervene, Thomas surprised his brother by making a move toward him over the chair instead of around it. Andrew, of lightning quick reflexes, flew out from around the chair and had almost escaped his brother’s grasp when he thwacked his foot on a corner of the wall.  Hard.  We then got to have one of those parenting moments where we make a decision without speaking out loud to one another. That decision was, “sure looks gotched but we’re not taking a kid to the ER for a gotched toe on a Saturday night.”  That’s when we sent him to bed with some ice and a dose of Motrin.

By Sunday morning it looked worse so I consulted facebook. Facebook told me that there’s no reason to take a kid to a doctor for a broken toe because “they” “never” do anything for a broken toe. When he spent the entire day on the couch with it elevated we knew something might actually be wrong, however, and decided that we couldn’t even bear to buddy tape them because it was obviously out of line and we suspected that maybe it was just jammed but didn’t want to make it worse.

So, on Monday morning, right after he delivered me home from having four wisdom teeth extracted, Mark took him to the doctor. She ordered an x-ray and Mark took him back to school.  Andrew's desk chair had barely had time to get warm when the doctor's nurse called our home. I was in no shape to talk because of the gauze filling my mouth, the ice packs on my face and the general fuzziness that results from anesthesia so I hazily told my mom to talk with her. When I heard, “Oh, two toes? A boot? For how long? When do we do this?” I just reached for another pain pill.

My dad went to have Andrew called out of class and, as he drove him to the doctor’s office, broke the news that he’ll be wearing a little walking boot on his foot for the next four weeks.  FOUR WEEKS. He’s been a great trouper. It’s a big shoe on a little leg.  The lesson here is that if you’re going to break toes, don’t break them where they meet your foot. Break them near the tips where there is indeed nothing to be done for you. 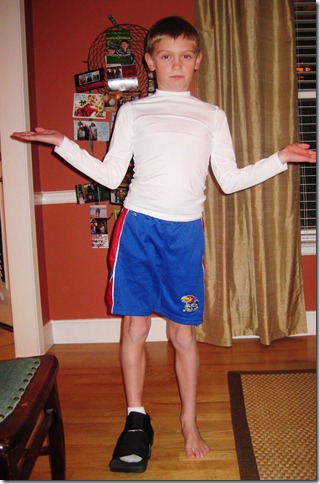 Poor Thomas actually lost a tooth at school that day and there was so much commotion with my throbbing face and Andrew’s new fashion accessory that he forgot to tell us until dinnertime. Needless to say, my parents and Mark earned stars for their crowns this week for dealing with the rest of us. 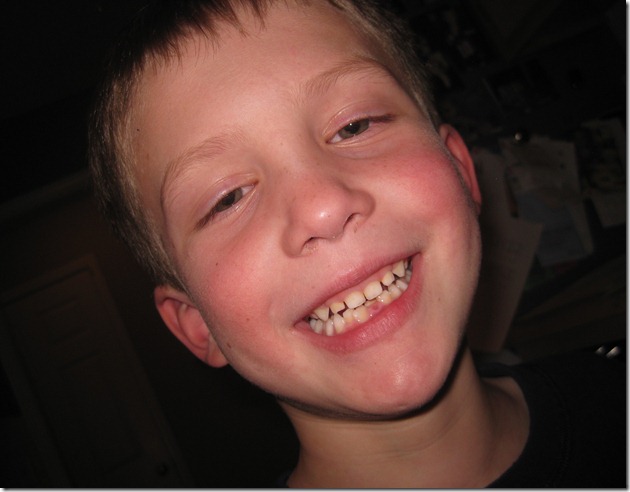 The bad news is that Mark has now developed a cold that isn't bad enough to keep him away from the gym or work, but it is a mancold, which is the worst variety, so he's as bad off as the rest of us. The good news is that we’re not actually all that bad off, we’ve got some good stories from the week and 2012 is off to a rollicking start!
Posted by Susan 2 comments:
Labels: Andrew, family, parenting genius, Thomas
Newer Posts Older Posts Home
Subscribe to: Posts (Atom)