Things were a little raucous at the Hondo dinner table tonight. The combination of a snowstorm, a late-afternoon ice cream cone treat, fresh haircuts and just being male was almost too much to contain.  As is typical, it was Mark who had a brilliant idea about how to refocus our young charges that didn't involve corporal punishment. He got out a piece of paper and asked them each to tell us their three favorite words.

I'll give you a minute here because I know you're thinking of yours right now.  Done?  OK.

That pronouncement was followed by hysterical laughter and a smugness that you just kind of have to admire.  This is a young man who knows what he likes.

Look for a reaction much? Unfortunately, he forgot that it was just this morning that he had asked about the definition of assassin because he had heard the term in relation to Abraham Lincoln. He also forgot that it was me he asked so that didn't come from quite as far out of left field as he might have hoped.

Mark went after him.  Forgetting that he hadn't asked what they boys' three favorite things were, he answered his own question with "Bicycle, computer and cereal."

This is shocking information, no?

At that point the conversation changed course as Mark and I debated how to spell assassin.  (It turns out it's appropriately spelled and easy to remember, what with that double "ass" right at the front.) By the time we got that worked out the game was over and I never got to tell my three favorite words.

I like words quite a lot and would have had a difficult time narrowing my choices on the spot.  But, if Thomas can do it, I should be able to do it also.  For tonight I'm going with "subsequently, apparently and catalyst."

So, lay 'em on me. If you're brave enough to list three you like leave them in the comments.  Remember, though, that "poop" is already taken.
Posted by Susan 6 comments:

This warms my heart. 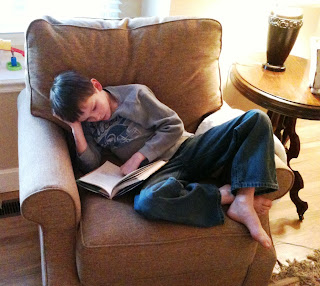 We even know his comprehension is alright because at the end of every chapter he delivers an animated recap.
Posted by Susan 6 comments:

The weather here is nuts today. It's the "fit for neither man nor beast" kind of day outside. Inside it's warm and toasty and dinner's in the crock pot and life is pretty good. It makes a person thankful.

Andrew has, since he could first clearly communicate with us, hated the smell of peanuts. He rejected his first-offered peanut butter sandwich. Much to my amazement, he once nibbled a Reese's Peanut Butter cup at Easter and then rejected that too. Is he nuts?! I should only have that willpower. Over the years he has made it widely-known that he doesn't like peanut butter, doesn't like peanuts and doesn't really like anyone consuming either in his presence. He can smell it an hour later and a mile away. We've often urged him to give it another try.  Try it with honey! Try it honey roasted! Try it with chocolate.  No way.

A couple of weeks ago he was set to spend the night with a friend and at 9:30 that night his host parent for the evening called and asked me if he was allergic to peanuts.  I assured her he isn't but relayed that he acts like he is because he's so repulsed by it.  She sounded somewhat relieved but said that he had eaten a few bites of a chocolate chip cookie and about halfway through the cookie had inquired if it contained peanut butter. The answer?  Yes, about three tablespoons in the batch of batter.

Apparently he spit that bite out but it was now an hour later and he was complaining of being itchy and she wondered if I just wanted to come and check it out. By the time I arrived down the street he was broken-out in full-blown hives all over his neck, back and chest. I administered Benadryl and brought him home for the night. He woke up the next morning with no trace of the hives and ready to roll.

A week later he came down with strep throat. I mentioned the hives incident to our pediatrician and inquired as to whether it would be prudent to do an allergy test just to make sure. I also shared that he's eaten plenty of things that have "traces" of peanuts on the label and that as a family we consume a lot of it so it seemed unlikely he was actually allergic. She agreed it was unlikely but thought we should do a blood test just as a peace-of-mind thing.

We finally got around to that last week and three days later, at 4 p.m. on a Friday, began receiving calls from the pediatrician's nurse on every phone we own. They really wanted to talk to us. It turns out that his aversion is pretty fascinating since he's "off the charts" allergic to peanuts.

This morning Mark, Andrew and I braved this nutty weather to meet with an allergist about his blood results and to learn how to use an Epi-Pen. The results indicated this sky-high reaction to peanuts as well as a very high reaction to soy, a moderate reaction to black walnuts and a mild reaction to corn. Go figure.

We have no reason to think he actually reacts to soy because, if you open your pantry, you'll discover it's in EVERYTHING.  (The allergist helpfully pointed out that the best way to avoid soy would be to grow all of your own produce and to include NOTHING that comes in a can, box, bag or bottle at the grocery store in your diet.)  Thankfully, he doesn't think we need to do that.

He does, however, think that Andrew needs to not consume any peanuts, walnuts, almonds, cashews, pecans, you get the picture. Peanuts are actually legumes but since he also has a reaction to walnuts all signs point to it not really mattering whether it grows in the ground or on a tree - it's off limits.

The good news here is that this won't dramatically affect Andrew's diet. He's not going to miss any of these things. It does mean we all have to be good at reading labels and he has to ask questions when offered food. Fortunately for us he's a pretty bright guy and I think he can do this. I mean, if he didn't want to eat a peanut three weeks ago you can only imagine how motivated he is now.

I think what's really nuts about all of this is how his body has apparently defended him all these years. It's a lot easier to avoid a food you don't like. Anything your body's telling you? Maybe you should listen!
Posted by Susan 4 comments:
Newer Posts Older Posts Home
Subscribe to: Posts (Atom)