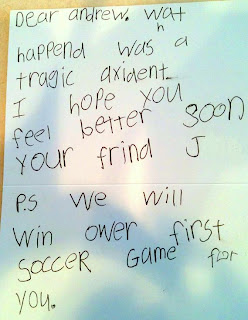 I had a regularly scheduled meeting on today's calendar that I regularly dread. I always dread this meeting for reasons that I shouldn't elaborate on in a public forum, but today I was feeling particularly anxious about it. It lasts until 5 p.m. and it was going to be a real feat for either of us to leave work at 5p.m. and somehow still have Andrew AT soccer at 5p.m. and then get Thomas to his first ever soccer practice from 5:45-6:45 and pick Andrew up at 6:30 and somehow have us all eat a dinner together that didn't come out of a box.

I know other families juggle this kind of activity every night of the week without breaking a sweat but we're kind of new to this arena. We had a plan thrown together but I left for work thinking that the plan was full of kinks and hating that this meeting was making it all more complicated. As is so often the case, the biggest kink was still lurking.

Getting a call from Andrew's school principal at 10:45 this morning telling me that he had fallen on the playground and had "bumped his head" turned out to be my golden ticket out of the dreaded meeting. Funny thing, though; by the time the meeting rolled around I would have given anything to be sitting in that uncomfortable, tense professional environment where I'm supposed to look like I have a clue what I'm doing. Instead I was keeping watch over my boy, who had given us an awful fright, and I felt way further in over my head than I ever do at work.

We had spent the intervening hours in the hospital emergency department where Andrew alternated between agitated and tearful to quiet and confused and, truthfully, Mark and I weren't any more clear headed than he was. He asked us a series of questions over and over and over in the ER and we answered them each time but, the more times we answered, the more difficult it became to respond calmly.

"Why are we here?" Because you fell at school.

"How did it happen?" You were playing soccer with your friends.

"Am I paralyzed?" No, sweetie. You hit your head but you walked in to the hospital.

"Am I going to have to spend the night here?" We don't think so but if you do we'll be right here with you.

"Where is Thomas?" He's at school.

"Am I having a dream or is this really happening?" It's real life, baby.  This is real life.

And so it went...for two plus hours.

A CT scan indicated that he has a concussion but no bleeding and no skull fracture and we were sent home with instructions on how to care for a child with a head injury which include staying near him tonight and waking him during his sleep. It won't be a problem because you couldn't pry us away.

He's still a little groggy and just sort of slow for Andrew standards. He doesn't remember anything about today, though he did eventually become able to at least wager a guess on what he had eaten for breakfast. We're trying to piece together exactly what happened on the playground because he doesn't have a clue and at this point it doesn't seem likely he's going to remember.

Needless to say he won't be at school tomorrow and he won't be playing soccer for a while. I also won't dread the next regularly scheduled meeting quite as much because no middle-aged man can lob anything at me that's more upsetting than watching a piece of your DNA hurt so much.
Posted by Susan 5 comments:
Labels: Andrew, family

We live in a quiet little town with our two children, one dog and 1.75 jobs. We lead a fairly simple life. With that said, I’m not sure why I can’t find time to document our existence here. We’re no busier than the average family. I think I just manage my time poorly because I somehow feel like I meet myself coming and going. Someday I’ll get better at this. In the meantime, I’ve made this my screensaver at work. It reminds me that at the end of each day my kids look peaceful and relatively happy.

This was taken on our summer vacation to Dallas. The boys shared a bed and, quite frankly, it didn’t go that well. At some point during each night we were in our hotel room I was awakened by them YELLING at one another about who had more blankets and who was hogging mattress space. Yet, early one morning, mere hours after a 3 a.m. tussle that could have woken the neighbors, we found this. 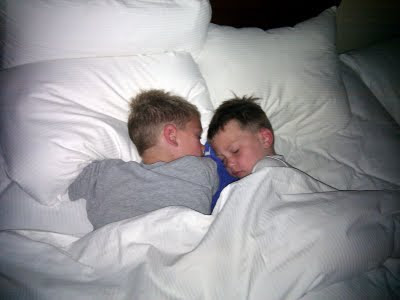 It makes me happy.