The birthday bunnies (aka: PaRon and Grandma) came a little late for Thomas' birthday and a little early for Andrew's this year. That was by design because what they brought came in a big box and took several hours to assemble, and it's a perfect shared gift.


I'll let you be the judge of whether the boys like it. 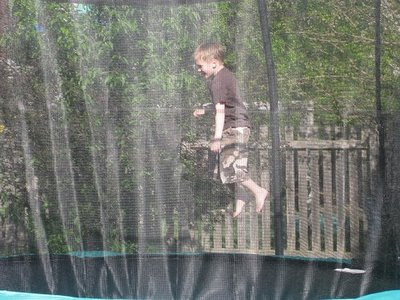 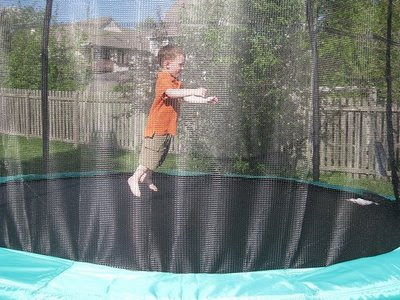 We're jumping for joy around here! So far Grandma, Aunt Martha, Aunt Stephanie and I have tried it out. Oh, yes, and a few kids too.

About the only one around who hasn't taken a spin on it is our neighbor boy, who would love to try it and spends a great deal of time watching through the fence seen behind the trampoline. His mom isn't comfortable with him jumping on it, which I understand. We're working to build her confidence in our safety precautions because it's a sad sight to see a six-year-old with the imprints of fence boards on his forehead while he watches the fun from afar.
Posted by Susan 2 comments:

I can't seem to put together a coherent post this weekend. I've tried but there's too much going. My sister and her family are visiting and it's non-stop go, which is exactly the way we like it, but the hazard of all that activity is that I can't seem to sift through it right now and turn it into full sentences.

I've got themes rattling around instead.

There's no time right now to flesh any of these out because we've got a date at the park with the cousins to play in more sand and fly down more slides.

I'll leave you, instead, with the genius of my three-year-old who said this morning, while patting my cheek, "Mommy, I love you. You're my mommy. You're the boss of this WHOLE house! You will be the boss of everything."

I love that kid.

Our little boy is growing up. Andrew survived his first official tooth loss today, and we did too. There had been one previously, but it didn't really count as the tooth had become loosened because of an accident and came out prematurely. This one, though, was the real deal.

He first noticed it was loose last week and upon discovery was distraught. He worked his way through an entire meal taking miniscule bites and refusing to use his flatware because biting down on his fork was what had lead to the initial finding. After that meal, though, he got used to it and I hadn't heard much about it since.

Until this morning that is, when he awoke in a red alert level of distress because said tooth felt "weird" and was "extremely loose" and was "really very bothering" to him. I knew it must be progressing because he refused to eat anything and wanted to drink his milk with a straw. Oh, and there were tears. Many, many tears. He wanted to know how we would know when it was loose enough to fall out and how would he keep from swallowing it? I assured him that of all the people I knew who had lost their teeth, I didn't know anyone who had swallowed one and then suggested, gently, that we could take a look and see how loose it was and that possibly it was ready right now. That idea was met with nothing but more tears and the red alert distress went all crimson and maroon on me. He was adamant he wanted me nowhere near that tooth. So, we decided to give it the day.

I e-mailed Mark as soon as I got to work and told him that we were going to have some more counseling to do tonight and that he might want to get his tooth pulling grip ready.

But it was not to be.

When I arrived at school this afternoon I was greeted by a chorus of, "Henderson lost his tooth!" Sure enough. Henderson's tooth was proudly displayed in a ziploc bag that was taped to his cubby for all the world to view. He was the legend of Pre 2 today.

After congratulating him I asked how it had fallen out of his mouth. His response? It didn't fall out. About five minutes after I left this morning his teacher, Danielle, pulled it for him.

Tonight we put it in the special pouch that Grandma made for him last time and he was full of questions. He wants to know if the Tooth Fairy flies or walks. What does she look like? Is she big or small? How small? How does she know which pillow it's under and how does she find it without waking him?

All good questions, son. I am pretty sure she walks and I hear she's stunning. I like to think she's on the smaller side, but the scale indicates she's getting bigger everyday. She knows which pillow because, well, she knows these things and she does it all without waking you because, thankfully, you're a very sound sleeper.

I did my best to answer his probing questions but I'm not sure he's convinced. This kid is a little too analytical for this nonsense. He does, however, love to put money in the bank so he went with it. I tucked him in for the night but I have a feeling that our sound sleeper has one eye open right now and there might be fishing line across his bedroom threshold. As soon as I wrap this up I'm going to text that fairy and tell her to tread carefully.
Posted by Susan 3 comments:

We were all in the car this evening after Andrew's last soccer practice of the season. Andrew was tired and was not responding to Mark calling his name so Mark began calling him things like, "A-Dimon," "A-Man," and "Mr. ADH," just to get a reaction from him - which didn't work, I might add. He continued to ride along, staring out the window.

Not wanting to waste any attention that might be coming toward the backseat, Thomas said, "What will you call me?"

I think we've been put on warning. Next thing you know he'll be asking for a batmobile.
Posted by Susan 1 comment:

While I was cooking (I use that term loosely) dinner tonight, Andrew and Thomas were riding a scooter and small bike around, and around, and around and around the kitchen, dining room and living room. As is typical in their relationship, Andrew was thinking he was in charge and Thomas was proceeding to quietly play the game his way, letting Andrew think he was following.

The game involved stopping frequently for gas in the hallway and doing a lot of honking as they drove through the dining room. I all of a sudden heard Andrew escalating his commands and it was clear that Thomas was on his own agenda.

A: "Why are you putting your scooter THERE?"

A: "How do you know about backing into a spot."

During dinner Andrew requested more sugar for his strawberries. Thomas piped up that he would like some more sugar also and, "no strawberries, please."

At the grocery store this afternoon we ran into a former co-worker and friend. She stopped to chat in the parking lot and said to Andrew, "You're getting so big that I wouldn't have recognized you."

Without missing a beat he said, "You know, I really am."

After dinner Andrew resumed speeding around the loop on the scooter and Thomas protested that it was his turn. I told Andrew that in four minutes it would be Thomas' turn, and asked him if he understood me clearly. He said he did as he zipped through the kitchen.

I reminded Thomas that I had actually said four minutes and he looked blankly at me and then said, "Right, three minutes."

I love that committment to a cause.

After tucking Thomas into bed I walked into Andrew's room to find him in bed, covers pulled up to his chin, hands behind his head, elbows spread out to the sides, staring at the ceiling. I asked him what he was thinking about and he said, "I'm just surveying my surroundings."

I said, "Oh, good words." I expected him to say he had learned them from me.

"Thanks," he said. "I learned them from a Scooby Do book at school."
Posted by Susan 2 comments:
Newer Posts Older Posts Home
Subscribe to: Posts (Atom)