I like a man who knows what he wants

Andrew's obsession with the Texas Longhorns has transcended football and now extends to the entire state. He's been asking for months when we can visit Texas and is now planning our trip. I don't know if he thinks Colt McCoy will meet him at the state line or if he expects that the skies are sapphire blue and the sun never sets, but either way, he's got Texas built up to be THE destination for the Henderson family.

It's cold here and the boys are tired of being inside so yesterday Andrew decided to spend a few minutes lobbying for a Texas journey. After grilling him for a few minutes about exactly what he thought we would do there he disappeared to his room, ostensibly to pout. He came back a few minutes later and presented me with this: 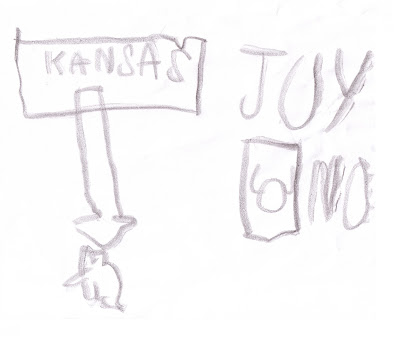 This is a drawing of Kansas - you'll recognize it in the middle, with an arrow pointing south to where Texas is. You'll recognize Texas as the tiny animal-shaped thing at the bottom. This was to show us which direction we would need to go.

The rectangle with the circle inside it on the right is a passport with the word "NO" next to it because he wanted to remind me that you don't need a passport to travel to Texas. (I've been talking about renewing mine and he's ready for his own but knows he doesn't have one right now.)

And the word above that is intended to read, "July." That's when he would like to go because July is his favorite month of summer and did I know that his birthday is in that month?

He once again proves that he's got a will, and you know what they say about wills and ways!

Hooray for Andrew! Way to go! He knows a good state when he sees, hears, and gets "hooked" by it. His Texas born grandparents are proud. He's got a lot of relatives there to help him discover his "roots."

I'm especially impressed that he drew the divot in the corner of Kansas (albeit in not quite the right spot, but still). Texas in July - a lovely combination!

I'm speechless! Andrew rocks! I'm hoping I can work on him to get that excited about CA...maybe get more visits out of you all! :)