Playing catch-up. It's a long one. Hang with me.

I'm constantly playing catch-up. I'm certain I'm not at all alone in that feeling. You know the drill. It's a bit like the plate spinning circus act where one thing gets attention until something else is about to fall. It's not pretty.

Obviously this blog has not been on the list for the last few weeks.
I intended to recap my visit to my sister's last week. I envisioned that I would make time while I was there, yet I didn't ever get to it. She did a great job right here so I think I'm moving along. The only things I would add are that:

My boys all did great while I was gone with heavy assistance from the grandpa taxi to and from school and swimming. Mark kept up with the laundry and everyone was happy and healthy when I returned. Thomas did seem to discover "why?" while I was away. I feel as though I've answered that question a lot in the last three days. He's also just more conversational everyday. Mark and I could hardly watch the cliffhanger ending of tonight's Super Bowl because Thomas' running commentary about the game was hilarious. He was convinced that Oklahoma was playing because the Cards were wearing red. We gave up telling him otherwise and just went with it. He desperately wants to be one of the guys.

Another outcome from my trip was the certain realization that our mattress is shot. I had been suspicious for months but after four days on a new, softer mattress my suspicions were confirmed. When I mentioned this to Mark he readily agreed. We've been sleeping on a handed-down one that is at least 12-years-old, possibly older, and it's done. Our first signs should have been that we've both replaced our pillows in recent months, thinking that was the problem. We corrected the real problem today with a new mattress purchase. I walked through the furniture store seeing approximately 14 other ways I would prefer to spend that money but I think this is the grown-up way to go. Perhaps my childhood dresser will look better if my back doesn't hurt while I'm looking?
We also had the pleasure today of giving Mark's friend, Kevin, a ride to the Lawrence airport where his plane was tethered, waiting for him to fly it home to Austin. The boys both sat in the plane and then we watched him takeoff. He built it himself and it's a tiny, sportscar looking thing. To me, terrifyingly tiny, but the boys thought it was very cool. 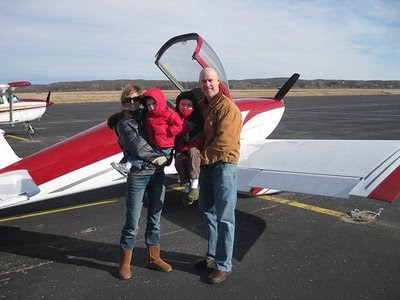 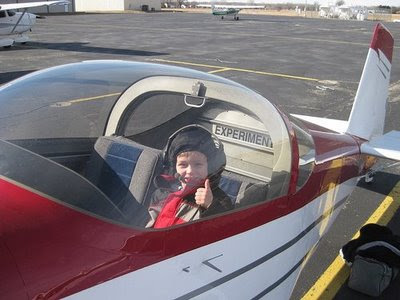 After a busy day of mattress shopping and airplane watching, we decided to host an intimate Super Bowl party for the four of us tonight. Thomas and I made football Rice Krispie treats and we had hot dogs and cheese dip for dinner. I subscribed to Cooking Light yesterday so I somehow felt justified.

Thomas is my kitchen helper. When he sees action, he scoots his chair across the room faster than you can imagine. Tonight he insisted upon putting on his cowboy boots before working. 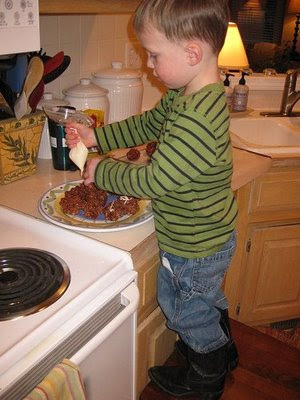 Andrew wanted in on the icing part of the process because he wanted to eat them. 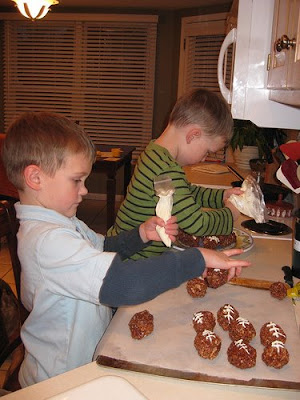 Thomas took the work of putting the laces on the balls very seriously. He called me over to tell me that "this one" had too much. I'll let you be the judge of exactly which one that might have been. 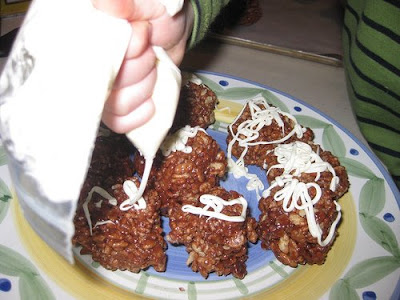 I want the one with ALL the icing. Sounds like a fun party. I must admit to rooting big time for the Cardinals. It was really great to hear what a good time you had with Stephanie and Wyatt. I was so glad that you went for a visit. Now, out on this coast we can't wait until you all get here!

Wyatt spied this post as I was reading it and wants to see some "airpanes". So when I pointed out that it was Uncle Mark & Aunt Susan, Andrew & Thomas in front of the airplane he said, "I like Aunt Susan!" So there you go.

I am glad I am not the only one who feels they are always playing catch-up. Love the cowboy boots by the way!

I am glad I am not the only one who feels they are always playing catch-up. Love the cowboy boots by the way!

Wow! I am way impressed with the football themed rice crispy treats. So crafty! :)