You be the judge

Thomas' summer camp announced way back in the spring that they would be closed today so the school's entire staff could attend traning together. August was so far away, but at the time I checked the calendar what stood out to me was that it could be like a last hurrah day before school started. I boldly noted it on my work calendar as a vacation day and didn't think much more about it.

As the day rolled around, we toyed with the idea of going to a waterpark today and when that wasn't going to work out I felt like I should let the boys plan some sort of adventure to make it different than any other day at home. After a summer of 100+ temperatures more days than not, today arrived with a high of 75 degrees and cloud cover that made it almost chilly until mid-afternoon. After much discussion we decided to head to a miniature golf course and hit the links.

We drove 25 minutes to get to a "Gooney Golf" locale and we were all three in good spirits. Andrew was, in fact, in high spirits. He had to be reminded more than once to stop pretending to be at the driving range and to stop slamming his club into the dirt like a hammer. My patience was, admittedly, a little thin after having to ask him to please keep control of his club (conservatively) fouteen times before we reached the third hole.

On the fifth hole, Andrew hit a patch of rough luck and had a hard time getting the ball past an obstacle. Adding insult to injury was that his brother had not had the same trouble. After finally getting the ball in the hole, I asked him how many putts to record for him. He paused a minute and tossed out a number that I knew wasn't quite accurate. I looked at him and asked him if he wanted to try again. He didn't. He was sure that his first three putts didn't count because they were "bounce backs." I let it go. On the next hole, I had a "bounce back" and when I asked him if it counted, he assured me it did. We went back and forth like that for a few holes. Him shaving points off his total, me grumbling about it.

At about hole 10 he became very excited because apparently the last time he was there with Grandma and Grandpa, he got a hole in one. He confidently hit it off the tee and it richocheted all over the place. Three putts later he got mad and took his ball off the green. I stepped up and, miraculously, hit a hole in one. He lost it.

That's when I did this: 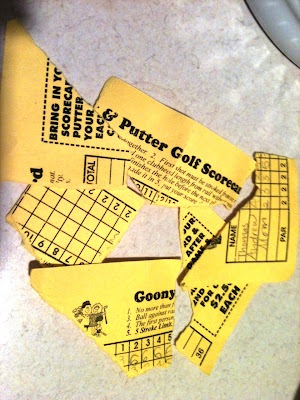 I still can't decide which one of us should be most embarrassed by our poor sportsmanship. Him for cheating or me for freaking out about it. Actually, I know the answer. Just don't judge me for it. It's tough to learn how to raise an emotional copy of yourself.
Posted by Susan

You are an amazingly wonderful mom! You have "the patience of Job," as the old saying goes. You're also human. There will be a teachable moment soon that will bring all of this into perspective.

I needed to read that right now after spending the day trying to be "fun" mom and failing horribly. They really know how to push our buttons. You are an amazing mom! I wouldn't choose anyone else for my 2 gorgeous nephews! :)

I am seriously laughing as I am reading this. We took the boys miniature golfing last year and swore we would never do it again until they were old enough to handle it. We just felt lucky that neither of them ended up with a golf club-sized indentation on their heads!

We simply don't keep score when we take them, mostly to possibly spare the feelings of son #2 and possibly prevent boasting. Is that the coward's way out and sending the wrong message? I'm never sure what is best.

As someone who gave herself an "f" in the parenting department on Monday and only managed to pull at c+ the next day, I think you did just fine. I just tell myself that it's okay for my kids to see parents are humans, too. Maybe then they'll stop expecting me to conjure magic at every turn.

I am sitting here laughing to myself. In both of your defense, the Gooney Golf is one of the most challenging courses around here. hehe :)