Eleventy dollars. That's how much Thomas told me it costs to park in the lot that's adjacent to the boys' living room airport. When they used teamwork to drag the entire basket of cars from the basement to the living room because they had already used all the cars upstairs, I should have been suspicious. Instead, I was cooking dinner. And, obviously not paying much attention because I was genuinely surprised when they showed me this: 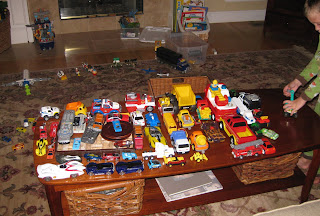 The airport centered on the use of the coffeetable as a parking garage and the new lego plane that Andrew recently built, which I'm told is a 747. 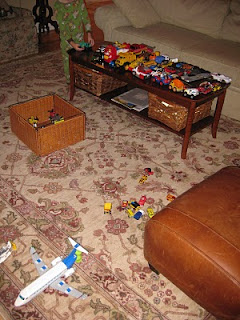 Thomas even made many trips between the kitchen and living room with his toy coffeepot bringing coffee to the "airport worker," his brother, who I'm not sure was appropriately thankful for that kind of tarmac-side service.
Posted by Susan

I well know we must savor the moments of sibling love rather than rivalry! :) Miss those cute boys!

There are so many times when I wish I had "eleventy" dollars to pay for something as neat as being able to park in their airport lot. What a delightful time they were obviously having. How super!