I logged on to my sister's blog yesterday and was greeted by a beautiful new layout and design. I was instantly jealous because I've meant, for months, to do something to jazz up the hondo layout, but had  figured I needed Photoshop, which I only have access to at work. Because my parents raised me with a completely annoying work ethic, I just hadn't been comfortable doing that on my employer's time.

Imagine my delight when I fired up the laptop from home today and was offered access to approximately a gajillion new layout tools from Blogger. To that I say, it's about time! After perusing some options I've settled on this one for today. I anticipate this will change frequently because changing your blog to match your mood has just been made way too easy.

So, yeah. Barb wire. I tried to soften it with the touches of pink. Is it working? The last few days have been the kind that leave you pleading with your children not to grow up too quickly because being a grown up ain't all it's cracked up to be. Or, perhaps I just max out too quickly in the responsibility department and we should hire out that part of their training for the future?

Mark had an outpatient surgery on Wednesday and, with a couple of huge assists from Grandpa and Grandma, the day went well. Then came Thursday, which is when it started to feel a bit like the wheels were coming off the cart. I woke up at 5:30 Thursday morning to the unmistakable sound of a sick creature. My first thought was that it must be Mark but quickly realized that it was the dog. She will hereafter be referred to as the damn dog.

I rushed her outside after one heave on the carpet and thought we had dodged a big bullet. I stumbled back to the couch upon which I was sleeping - so that I could be close to Mark who had chosen to sleep on the other couch for post-surgery comfort - and realized that what I was smelling couldn't be right. It turns out that I hadn't woken for the main part of the damn dog's show, which started on the stairs and trailed throughout our home. Awesome.

It only took about four hours to steam clean the carpet, which is when I got to work on cleaning up the deck where she had continued her puke fest after I put her outside. Mark suggested that I might go walk the backyard to see if we could tell what in heaven's name she had eaten to make her this sick. I didn't find a thing except for the discovery that the previous evening's torrential rains had washed several cubic yards of mulch away from the swingset, into the grass and up against the fence. The day was getting even better.

Enter Grandma, who offered to come help me with the shovel and rake brigade to get the mulch back where it belonged before it washed into the neighbor's yard, never to be seen again.  But? Before I ever lifted a finger I went in the house to check on my patients and discovered that the human one was very uncomfortable and nauseous and the canine one, who was trapped in the kitchen, was wheezing and drooling uncontrollably. That's when I took her to the vet while my mom AND dad moved mulch and kept an eye on the post-surgery situation playing out in the living room.

She only barfed once in the car and I had to drag her inside the office. I left her in their capable hands, telling them I couldn't stay because I needed to get home for Mark. That was partly true but it's also possible I've never been so happy to part company with another living being. We needed a break from one another. I returned home to find that super mom and dad had pretty much fixed the mulch situation, reseated the weed mat that was tangled in the mud and that my dad had gone to buy a few extra bags of mulch to secure the perimeter.  Thanks be.

When the vet called at 5 p.m. to say that they couldn't find anything technically wrong with the damn dog and that I could come get her but that she was still having "loose stools" (sorry) and I would need to go buy her some Pepcid and cook some rice dish for her to eat, I did what any loving pet owner who is staring down the barrel of night two with her post-op husband and a looming t-ball practice. I bought her a night at Spa Animal Hospital. She's being bathed before her return. I hope she enjoyed her stay. She is truly the best last dog we've ever owned. 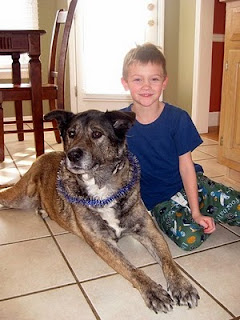 Mark is trying to rally this afternoon but it's a little slow going. When you see the barb wire replaced with roses you'll know we're fully back amongst the living.
Posted by Susan

Oh, my! I know it's not funny, but your writing rivals that of the late Erma Bombeck (before she was "late", of course)! I laughed until I had tears running down my cheeks and then attempted to read it to Uncle Harold only to be overcome with laughter again. Hope "Damn Dog" and beloved hubby are both doing much better today! Hugs to all of you!

Aw, I hope your sweet pup is all better!

So I am a little late on reading this one. Soooo awful! I don't know how you are holding it together?! Sorry. That probably isn't helpful. But really, how?!

I'm getting worried--still no roses!:)