It hadn't been brushed for a solid 10 days and it had been hanging at a precarious angle since last Thursday.  And by precarious I mean awkward and unappealing.  He wouldn't let me touch it and he wasn't interested in even discussing removing it himself.

That's why it's such a good thing that he's a rambunctious kind of guy who became involved in some sort of mock speed skating event at school that knocked that puppy clean out of his mouth yesterday.

He told me that he feels more grown up with it gone and that he'll be a man once he loses all of them.  My heart can hardly handle the thought but this is pretty cute: 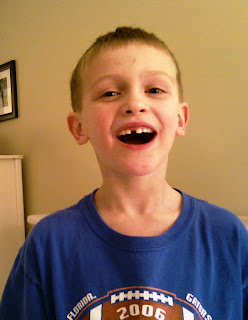 Way to go, Andrew! Love your picture with the great space in the front. Enjoy drinking through a straw with your mouth closed. Neato!

CONGRATULATIONS! You are decidedly more mature missing that tooth. And that picture reminds me of your mom. Sorry, Suse.

now that's the way to do it! nothing like a round of speed skating to finish the job!

So cute! I am emailing a picture I have that looks almost identical!