Get in line, girls

Thomas has been battling a cough and the cough has won. After two trips to the doctor in a span of 48-hours he started prednisone last night and we're maxing out his breathing treatments. This is full-on warfare. When any child of mine is moaning, choking, gurgling and coughing continually in his sleep for hours on end and is so oxygen-deprived that he's delusionally telling us about the tunnels in his room at midnight, it becomes a no-holds-barred type of engagement.
He technically could have gone to school today but we thought he could use a day of rest and that the other kids probably didn't need to listen to him. The kid literally hasn't slept in three days so we hoped that he might expend less energy away from the mania of Preschool 1. Grandma and PaRon were willing to watch him so I could attend a way too long meeting today. He definitely had a great day there and was pleased to have drawn that assignment.
When I arrived to escort him home I learned that he had been forced into child labor. Only in this particular case it was his idea and he was delighted to have been drafted. Grandma has a couple of small utility ladders that he loves to use while he "helps" her with housework. Apparently after the dusting today he offered to do a little tub scrubbing. You'll see that it too involved the ladders and oh boy, did he have fun. 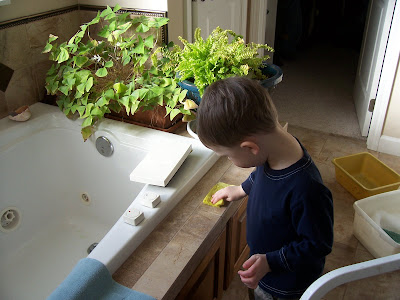 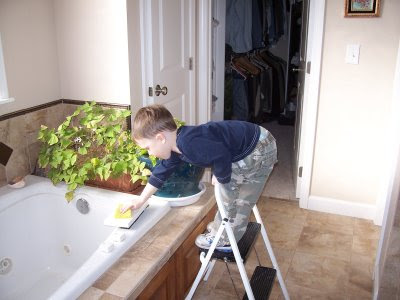 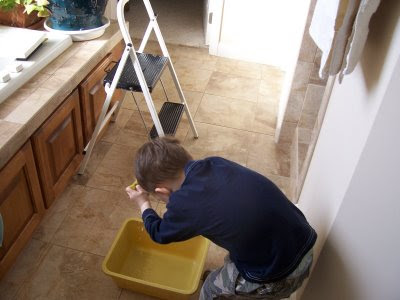 As you can see, he scrubs, he rinses, he wrings and he's darn cute. He is currently exhibiting some prednisone steriod rage and he's coughing up his left lung as I write, but this young man is a catch, ladies. Start your bidding.

Too cute. Love the pic of him leaning over the utility stool to "reach" the tub to scrub it.

I'm hoping that Eric's competitive nature will kick in when he sees that a 2 year old knows how to clean a bathroom!