My compliments to the chef

As Andrew's food repertoire grows we strive to offer things we can all eat happily. It's so refreshing when we're all eating the same meal. Spaghetti is now on his list of approved foods but, to date, had not been on Thomas'. Like many other foods, he seems to want to eat pasta but it also seems to make him gag. He'll always try a bite but it usually ends in a rush for water and us telling him to just spit it out already! (This is where someone can insert a joke about how if I knew how to cook pasta it wouldn't congeal to a texture that leaves it as a gagging hazard.)
For whatever reason we seem to have rounded a corner on this, however. Last night he ate spaghetti successfully. By "successfully" I mean, "with both hands, with enthusiasum, with sauce." That is a fork in his right hand but it was merely an accessory. 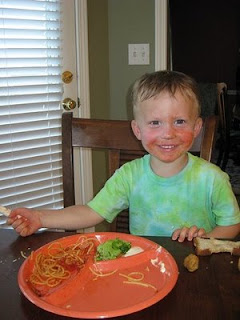 After dinner Andrew made a grocery list for us. Thomas wrote his also. As I dictated the spelling of words Andrew wrote them out and Thomas repeated me letter for letter. 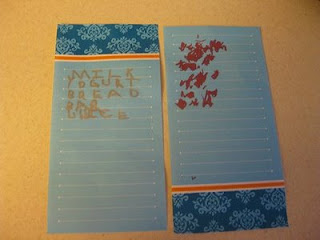 Andrew's covers his diet basics: milk, yogurt, bread, bars (NutriGrain) and juice (orange). When I told Thomas we were having pizza for dinner tonight he said, "no pizza, noodles!" Because of this I'm guessing his list says: a good cabernet, garlic bread, olive oil and marinara.

The good news is that he cleans up well and the strawberry chap stick that he ate this morning (channeling his inner-Aunt Stephanie) pretty much covered up the scent of tomatoes.

Glad the menu is widening. Aunt Stephanie seemed to thrive on Chapstick-probably Thomas will too. Grandma