We've officially got FIVE! on the books. It was a more than weeklong event that began on the holiday weekend and came to a close on Saturday with a party for friends. Lucky kid, huh? He started getting mail on about the 3rd of July and it just keeps coming.

We spent time over the holiday weekend with my aunts and uncles, which is something I hope my kids will someday recoginze as the treat it is. I grew up thinking it was average to have a whole bunch of cousins and a whole bunch of aunts, uncles, great aunts and great uncles just hanging around. In my advanced years I now realize that it's not necessarily the norm but it's a blessing. And, not only do my kids have the opportunity to really get to know this extended family, but they're being spoiled by them as well.
Andrew received a couple of gifts from family over the 4th and the big hit - with the uncles and the kids - was a glider that winds up with a giant rubberband. The box said it could fly the length of two football fields but the uncles doubted that it would carry through on that threat. It gets assembled, it gets wound up and... 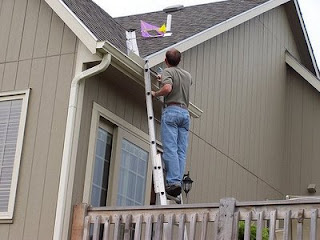 it gets rescued off the roof of PaRon and Grandma's house by Uncle Dean. After being admonished by the birthday boy that this wasn't a good idea, we moved to another locale. At that locale it ended up flying over the houses across the street, bypassing the empty field it was intended for and landing in the backyard of some folks a street over. By a stroke of luck and coincidence it turns out that I know the people who live there and, this is the best part, they were out of town so we let ourselves into their backyard. At that point the party moved to the elementary school's soccer field up the street where we had success. 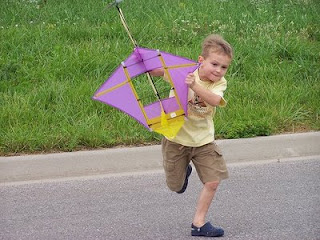 Not to be left out of the action, Thomas is now the proud owner of a fireman's nozzle that fits on a garden hose. The yard has never been so well irrigated. 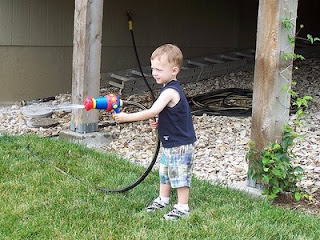 The birthday extravaganza continued on Tuesday when PaRon and Grandma surprised him at school to take him shopping. He went to Wal-Mart with them all by himself and chose any toy he wanted that had a price tag beginning with a "1"or a "2". He somehow turned that into a couple of those for himself, one for Thomas and one to leave at their house. I could feel some guilt over that but I figure if they're soft enough to let that happen it's not really my issue. He chose great things and then insisted they take them home and wrap them so he could open them on Wednesday!
My gift to Andrew was carrying out his wish to take donuts to school to celebrate his birthday. They had to have sprinkles, they had to have white frosting and we had to purchase them that morning at the Dillons' bakery. Picture me with both boys, pre-8a.m., juggling 24 assorted sprinkled donuts while trying to manage the self-checkout. I was sweating by the time we arrived at school.
Wednesday brought all the birthday hoopla one boy could stand both at school and at home complete with him decorating his own birthday cake. The amount of sprinkles and colored sugar that one white box cake can hold is astounding but PaRon, Grandma and Great Grandma were good sports in eating it anyway. And, Thomas? He's still eating it. Breakfast, lunch and dinner. 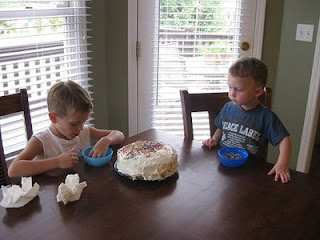 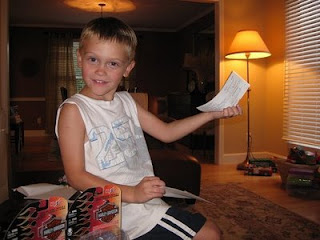 Saturday ushered in the fast-becoming-annual Gymnastics Party. Andrew and 10 of his closest friends enjoyed the trampoline, bounce house, foam pit, balance beams, slides and rings for 90 minutes of exhausting fun. It's money well spent and I even got to go in the bounce house with Thomas, which made my day. I don't know when I was last in a moonwalk but I think it's good for you. 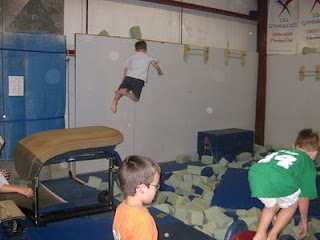 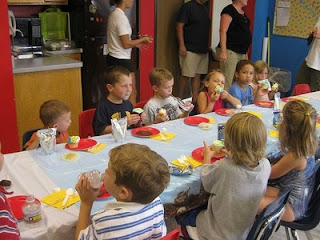 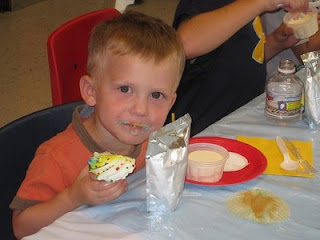 He's still getting mail (he's very excited to plant the cactus seeds that arrived today!) and he's trying to use five-year-old manners. He informed me tonight that now that he's five he gets five of everything and that he would try to earn that privilege. I'll keep you posted on how that's going. In the meantime, he's coming back to earth!
Posted by Susan

The pictures of the party on Flickr were great to see. We could almost "feel" the joy and excitement of the celebration. And, it's so neat to hear all that happened during one fantastic birthday week. That is truly the way birthdays should be celebrated. Hooray for Andrew! Love, Grandma RoRo