Is this thing on?

So. I guess I took the summer off from blogging. That was unintentional, but some math whiz could probably work up a chart that would track the inverse relationship between the amount of blogging I did and the amount of time the boys were at home and the amount of time I've spent trying to figure out how in the world to write coherently and intelligently about insurance. My summer was awesome and humbling all at once. Now it’s September and the fun of the swimming pool, long bike rides, a California vacation, a South Carolina vacation and a couple of birthdays around here are distant memories.

Labor Day weekend marks not only the end of summer but also our wedding anniversary. My parents generously offered to stay with the boys last night so we could go eat sushi to celebrate. Anyone who is my Facebook friend already knows that during dinner Mark also needed to participate in an online Fantasy Football draft, so there's that, but we had a nice meal. (In all honesty, it's a father/son league that some friends and their kids organize and Andrew probably enjoys it more than Mark does so it was difficult to be upset with him for having to frantically scroll through available running backs between bites.) We had a great evening but by the time we got home, got the boys in bed and prepared for the beginning of another week, we didn't end up opening our anniversary cards.

I came home this afternoon and decided to go ahead and open this beauty from the love of my life. Isn’t that a nice sentiment? 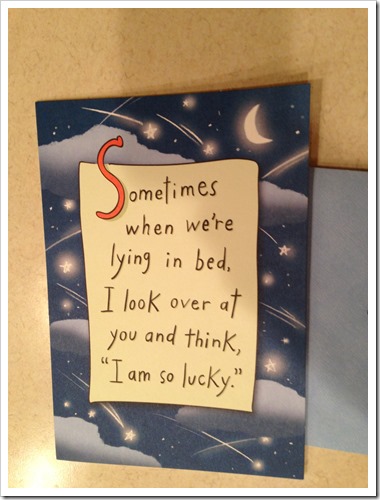 Then I opened it. 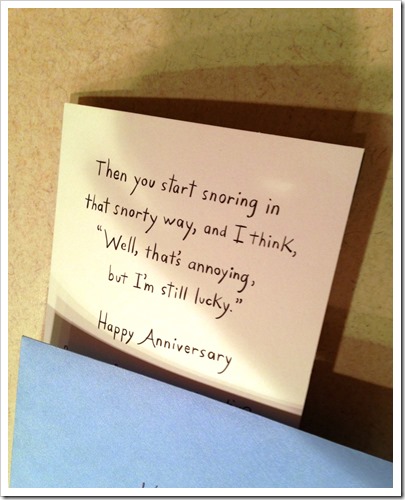 Under some circumstances, on some days, in some moods, I would have been offended. Except, guess what? 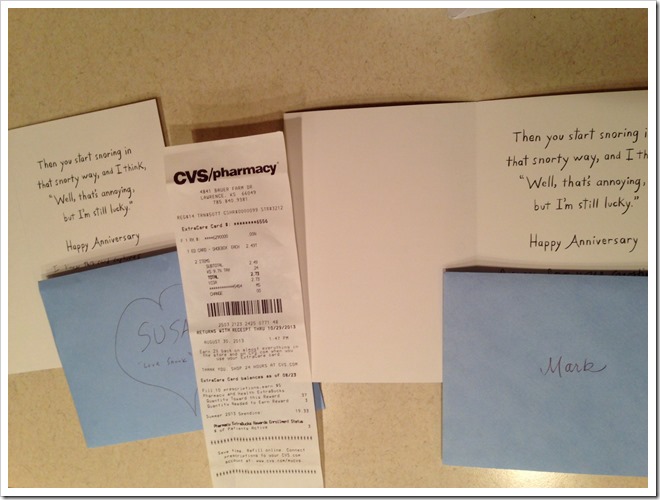 That’s right. We bought each other the same card. We purchased them at different stores and I have the receipt to prove I chose it first, but still. Next thing you know we’ll start looking alike and sharing reading glasses. This summer may have been an uphill blur, but at least I’m crawling uphill with someone with the same sense of humor.

Delightful. Once again, happy anniversary. A sense of humor is a great gift.

That is AWESOME. happy anniversary from your sister who gets an F for her failure to call you.

I really should call you on your anniversary and thank you for marrying my brother. Because you're just awesome. xoxo