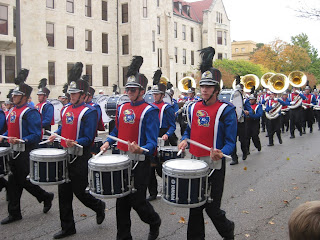 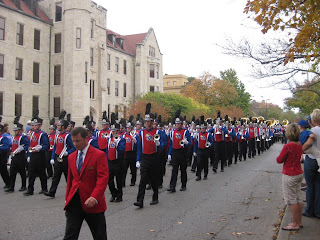 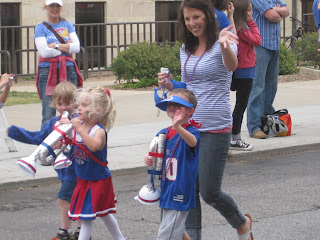 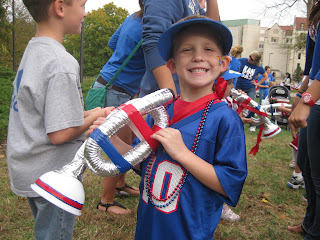 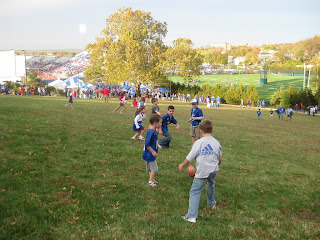 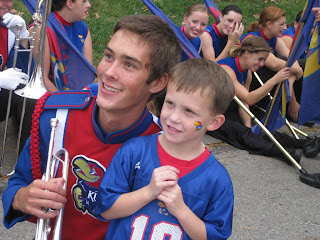 Okay, that was spectacular to read and see pics of and to "be there" in my mind's eye and heart. How wonderful of Miss Lori to arrange for something like that. What a fantastic memory they'll all have and look how much they learned. Can't wait until Thomas begins playing the "real" thing.

That is so neat! I am envious of the whole football experience you and your kids get in Lawrence. The last pic of T with the trumpet player is the best. Got aunt Maria teary!

Awesome! What a great memory for T - I'm convinced our boys are at the age where they'll remember BIG events and I think this will qualify. Love it, love it, love it. So glad T had a perfect morning!

I just wanted to share an insiders moment about "my" Thomas as we walked together, side by side in the KU homecoming parade. Although the cheering from the spectators almost drowned us out, I still managed to hear Thomas blowing into his homemade trumpet and enthusiastically making all attempts to make music as he marched down Jayhawk Blvd. This day ranks up there with one of my favorite teaching memories. I am blessed.

Excellent!! I was right outside the Union when the parade kicked off, and I saw the group - but T's hat must have hid his little face, b/c at the time I couldn't spot him...too much fun!!

I love the post! My name is Josh, the trumpet player in the picture with Thomas, and I just wanted to say that I am so very happy that he had a great time! I hope to see you guys at a game this fall! Hope all is well!

Hi!
I'm Josh's mom & I am so excited to see this photo & post! Josh described the circumstances to me surrounding the photo & I am touched that the teacher made all of this happen for the kids. I just love teachers who care!
It would be great for y'all to attend a game this fall if possible, as that trumpet player has made Drum Major! We're proud of Josh & so happy for him, but we also think that maybe an updated photo is in order!!
Blessings to you all.