It is possible to keep Thomas up so late that he will sleep in the next day. Unfortunately he'll also be not-so-delightful a few hours after he does decide to wake.

Andrew loves the Texas Longhorns so much that I would say he's already gotten $50 worth of good from his new helmet and jersey that Santa brought. He wore it two days in a row and is asking if I can wash it RIGHT NOW. 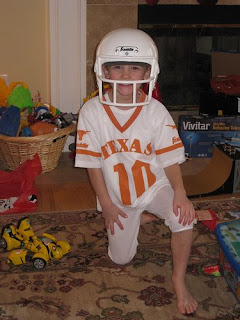 Waking up to find your grandparents and great grandma in your house is so overwhelming that discovering Santa presents on top of that is just plain too much to process.

Your toddler crawling up in his daddy's lap and promptly falling asleep during Christmas Eve service is for some reason heartmelting. Watching your husband sacrifice being able to stand, sing or hold a candle during the service because he's holding said sleeping toddler is way beyond heartwarming.

Andrew needs to go to church more often. He has lots of questions.

We must clear out some toys that aren't being used. My house is apparently shrinking.

It's a good thing Santa brought a doctor's kit. Andrew has diagnosed me with a heart infection and Thomas has diagnosed me - several times daily - with ear infections. Hopefully Andrew is wrong, but sadly, Thomas might be right. 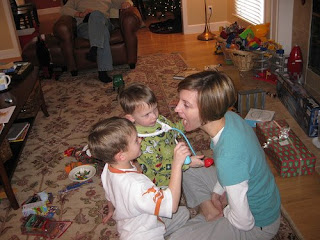 Recycling cardboard after a few days of gift opening is somehow therapeutic.

When it's 66 degrees on the day after Christmas, you must pull your kids away from their new toys and force them outside because you could wake up the next day to an ice storm.

Here's hoping your holidays were as merry as ours!

I learned many of those same lessons this Christmas! Claire got a doctor kit too. It has an "old fashioned" thermometer that my kids don't know how to use because it doesn't scan your ear or forehead. I thought that was funny. :D

Did you let Andrew stay up to watch the game last night? It was a good one!