Our Thanksgiving weekend was great. Turkey Day was full of food and family and more food and more family. Andrew and Thomas had a blast playing with their cousins Connor and Camryn and are asking when they can do that again. (Hint, hint Amber!)

Friday began with a visit to the pediatrician where we picked up a prednisone** prescription for Thomas who has been hacking up his left lung for 10 days. It ended with dinner downtown with good friends and their kids and then a visit from Santa as he arrived for the season on the rooftop of Weaver's. It's a Lawrence tradition that he's rescued from the roof by a fire truck, which was mesmerizing for Andrew and terrifying for Thomas. We're doing our best to scar our kids at every turn. **SIDENOTE: Prednisone is a miracle drug in its ability to get T's lungs back on track. However, the devil is somewhere in it. He was literally bouncing off furniture and kitchen cabinets tonight dancing with one shoe on, yelling, "I a peanut!" over. and. over. Wow.
Saturday brought a great KU football victory over MU and more lounging around the house in total laziness. The boys and I actually did venture down the street to eat pizza with friends and watch the game. We also put up our Christmas tree and boy, howdy, did I have help. And, 36 hours later I can guarantee that no more than 10% of the ornaments are in the same place in which they began. Say it with me...constant rearranging. Andrew also got in the spirit by turning himself into Rudolph while no one was watching. He cut out his antlers all by himself! 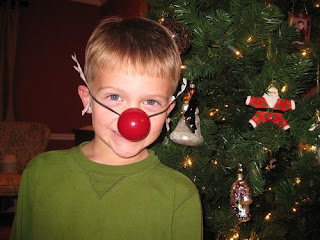 Today brought snow. Real snow. We had flurries yesterday but it didn't really stick. Today we awoke to a dusting on everything and big, fat flakes. We've already gotten our money's worth out of our new snow boots. 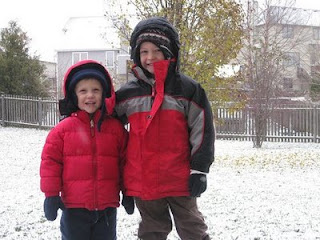 Last year Andrew would ask to go out but had no one but the dog to go with him. I'm so delighted that Thomas is up to the challenge this year and they seemed to have a lot of fun. It's amazing how kids don't notice that it's freezing cold and they're wet.

All in all, we had a great weekend and Monday looks pretty unappealing after four days of all four of us at home. Thomas begins life as a big Preschool 1 kid tomorrow so I'll need to turn in early to weather that emotional storm! Wish me luck.
Posted by Susan

The photo of Andrew is priceless & I can just picture all the "tree work" that has and will take place. Love the snow picture - that's the way I like snow - in pictures or wayyyyy up on mountains. Ours had a dusting this weekend. Beautiful "from a distance." You (and Thomas) are wished luck and love for "Transition Day."