It's been a big weekend for Andrew. Aside from getting to choose new goggles and having two friends come play yesterday, he's mastered two new skills. He can now proficiently ride his bike without training wheels and he can dribble a basketball and sink a shot on a real goal. (Low, but real!)

He started riding a two-wheeler last weekend but was a little tentative until today. It seems to have really clicked tonight. He did have a tumble on the driveway that required some attention but he didn't shed a single tear and wanted to go again. On the night he first rode without the training wheels, I told him I was so proud of him my heart just might explode. He beamed and then said, "Mommy, I'm that proud of me too!"

He's also gearing up for basketball camp with daddy and he's been a practicing fool. We went to the Wards' for dinner on Saturday and Scooter gave him an official KU Camp Ball. To say he's delighted with it is an understatement and he's figured out how to shoot it without clunking himself in the face with it. Our neighbors are out-of-town and have a goal in their driveway so he has used it liberally this weekend. He's going to be disappointed to see them roll in next week. We're probably due to install one of our own, but we'll have to figure out how to clear some driveway space for the court!

Both boys helped me collect trimmings from our shrubs this afternoon, by filling their little wheelbarrow SEVEN times and then dragging it into the garage to go in the trash can. Their work ethic exceeds mine!

The other thing we've had a lot of this weekend is thunder and rain, and it always seems to start just after the boys go to bed. Young Thomas does NOT like thunder so another dominant theme in our weekend has been consoling him back to bed. It's just started again so I'm typing feverishly, hoping against hope that he'll tough it out tonight. It's a good thing he's so cute. We could certainly have worse 2 a.m. company.

This picture truly is worth a thousand words! This is Andrew at 8:45 p.m. after an activity-packed Memorial Day weekend. I think this might sum up how we all feel tonight. He fell asleep sitting up, wearing his new jammies and his new swim goggles. I got those off of him without waking him up because, well, I'm just that good. 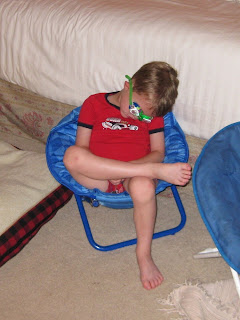 that picture made me laugh out loud! Thanks :)

Wow, I can hardly believe that Andrew is riding a "big boy" bike! It seems like it was just yesterday that he was a little guy like Cooper!

I am sure he will love basketball. Connor is playing tee-ball this summer, he is so pumped!

Yea Andrew! I know how proud you feel Susan. When Zac cruised down the sidewalk training wheels free I almost cried! Ahh motherhood. :)
Oh, and the goggles are awesome!