It’s time for the obligatory Halloween photos and tales of another successful year of begging the neighbors for candy. Thankfully, the most haunting parts of our week were over by the time Saturday rolled around. (As previously mentioned, earlier in the week we were paid a visit by a virus that we’ll assume for my sanity was H1N1. If it wasn’t the swine bug then I’m sure we’ll get to repeat it all again at some point in coming months.)

Last Sunday was the school Halloween carnival and, sadly, Andrew was too sick to attend but Thomas and I went and bought two sets of tickets so we could win prizes for Andrew and prolong the wearing of the Spiderman costume. As you can tell from the pics, just having it on his person made him VERY, VERY serious. Crimefighting is not for sissies. 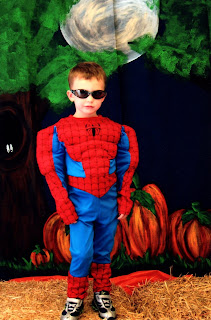 On Friday Andrew was well enough to return to school and enjoy not one but two parties with a costume parade at each of his schools. Regrettably, I have no photos of either of these in my possession because I haven’t received my Snapfish order yet, but he pronounced his skeleton costume “creepy” which was totally what he was going for this year. My baby is growing up.

For me, the highlight of Saturday was pumpkin carving. It was the first time that the anticipation of the activity hadn’t been more exciting than the actual gutting and cutting. We did something this year, however, that I had always disavowed. We carved pumpkins that were purchased at the grocery store. (Hangs head in shame.) I know, I know. Inexcusable. But, sometimes life just gets in the way.

Between perpetual rain, fevers and general unrest over the last week in our home, it just wasn’t in the cards to venture back to the pumpkin patch. Thomas and I had gone with his class and I thought we’d get back out with Andrew but alas, the only person it seemed to bother was me. The boys were thrilled with their ridiculously expensive, ridiculously large, ridiculously perfect pumpkins and we had a great time creating jack-o-lantern masterpieces.

Andrew did all of his own design work and most of his own carving, actually. (Don’t worry, grandmas. He wasn’t using a machete, he was well-supervised and still has nine fingers…) 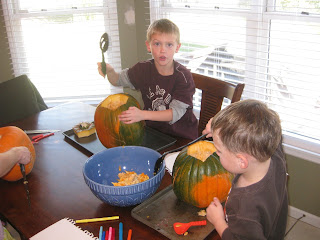 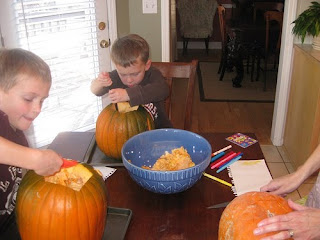 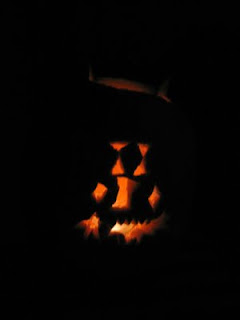 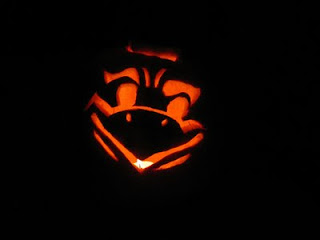 After carving it was time for a quick visit to Great Grandma’s and then off to our friends’ for pizza and trick-or-treating. They were so anxious to get going that we sent them out to the trampoline to run off energy until it was time to hit the streets. I love this picture of Andrew, aka Mr. Bones, and our friend, Emily, aka Superwoman, as happy as kids should be. Not to be outdone, Thomas and his buddy, Molly, spent a great deal of time on a glider, oblivious to the fact that Spiderman doesn't typically have time for such frivolity. 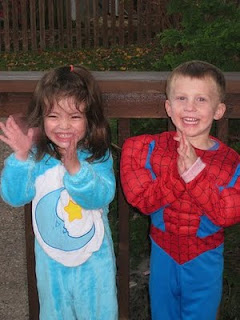 We returned home with more candy than any family needs but I guess that’s part of the drill. Thomas has discovered a previously untapped penchant for Reese’s peanut butter cups – that’s my boy! – and Andrew has learned he loves Laffy Taffy so we’ll call it a learning experience and just keep eating.
Posted by Susan

Love the pictures, love the commentary, and love it that all of you are well! Go, Spiderman, and Mr. Creepy Skeleton! Go, Super Mom.

Uber impressed by the Beak 'em face! And tell Thomas, er, Spiderman, his muscles are quite impressive!

LOVE the pics - I laughed out loud at serious spiderman. I,too, am quite impressed by beak'em hawk; can't believe that Andrew's big enough to carve his own pumpkin and wants to wear creepy costumes. Obviously we can't get back there fast enough to catch up with those boys. Glad you're all well! Thanks for the update :)

The pic of Thomas is hysterical! I want to eat him up! So glad that you all were well enough to enjoy Halloween. I know it was a close call!