Another Halloween is in the books. We had a skeleton and Toad in the house this year and thanks to Grandma, Toad’s hat was a mega hit with the second grade crowd. As tends to be the way with Halloween, we stretched the festivities out over a couple of days by carving pumpkins, attending a Halloween carnival at the boys’ preschool, enjoying parties at their elementary school and trick-or-treating with friends tonight. 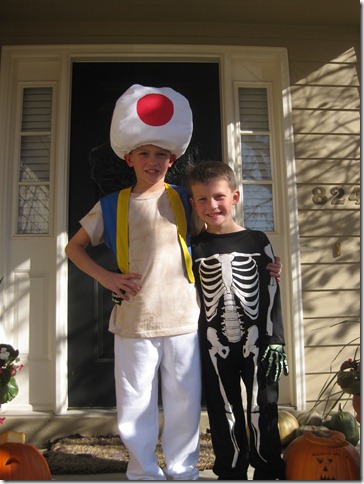 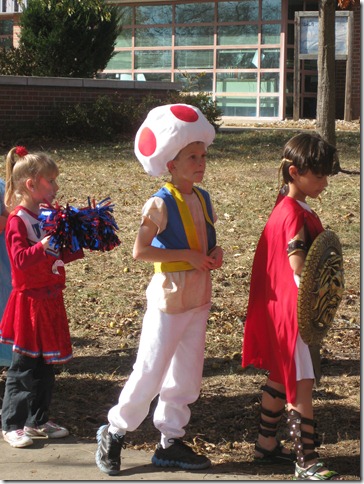 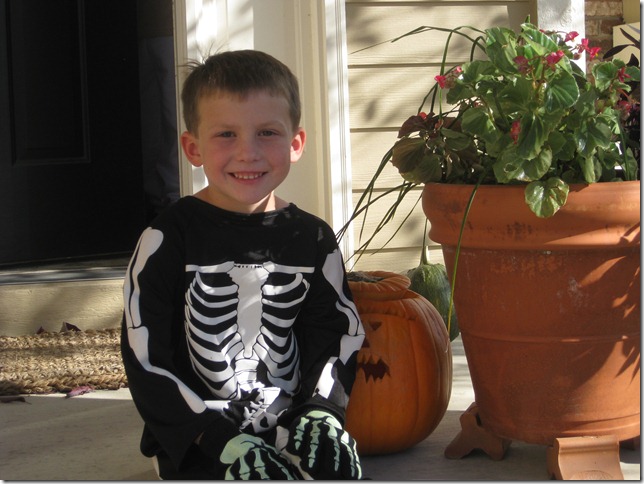 Andrew hit the ‘hood tonight with friends from school and a few of their parents. He was delivered home with a bulging bag of candy, which he had already ensured was nut free by making strategic trades with a buddy. I thought that was forward thinking. What might NOT have been forward thinking was the fact that I found all of these empty wrappers in his bag. These were just the ones he didn’t think to dispose of before I found them. I shudder to think what else he ate in addition.

A bunch of pictures hopefully worth a bunch of words

I'm falling further behind in this blogging quest. Pictures sit in folders, unedited, waiting to be posted and stories float around in my head, waiting to be told. It becomes kind of like putting off a phone call that you're dreading, where the longer you put it off the more difficult it is to make yourself pick up that phone.

So. I'm about to post a photo dump with captions; no stories to speak of and no weaving of tales, just a visual attempt to dig out of the pile. What follows sums up last weekend, though our Friday night excursion to see the National Acrobats of China, went undocumented. The irony of this is, of course, that it's the weekend again so I'm still behind but it will somehow feel like a small step in the right direction.

Thomas' last soccer game of the fall was last Saturday. He's sad. He loved playing and he loved practicing and I'm a little concerned that he's going to ask once a week until April how many more weeks until he gets to play again. We probably should have signed him up for basketball as a distraction. 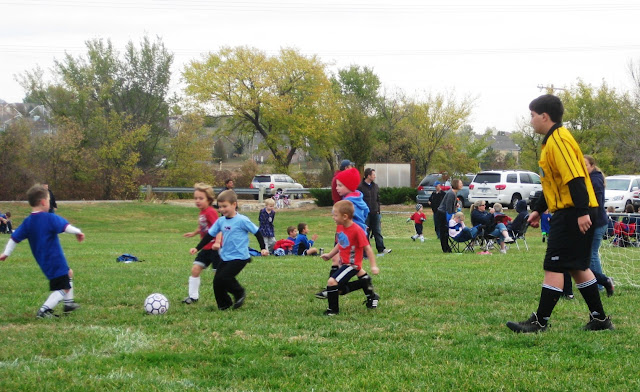 He's going in for the offensive assist. 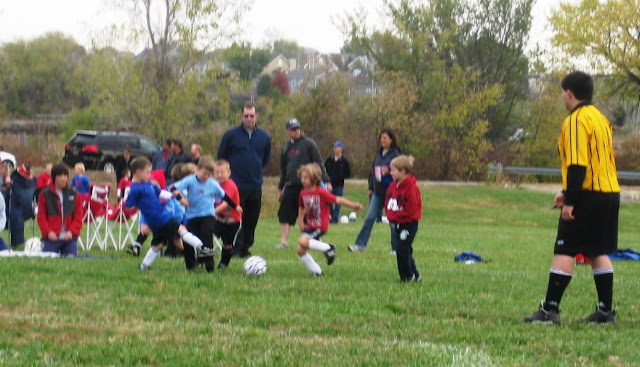 If you pretend that I can hold a camera still, you'll see that he has just kicked it straight into a horde of defenders.

Never fear, though. This culminated in a goal. He was a tiny bit proud of himself. 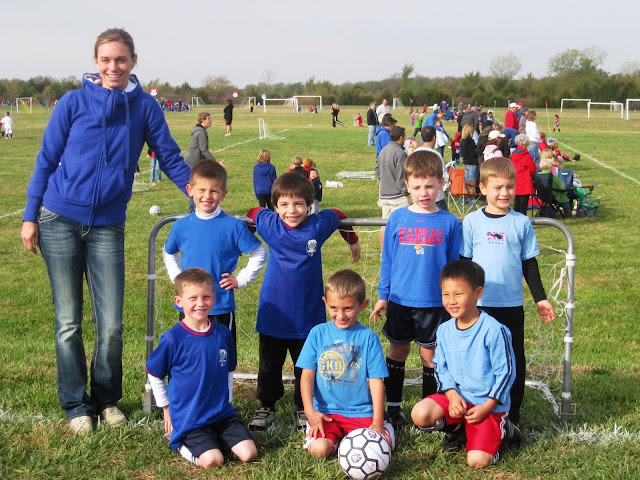 The Thunderbolts RULE! This was one aggressive group of little boys and once again, we totally lucked out with the coaching staff.

This is Coach Natalie and we're very glad her son is in Thomas' grade because she was a great, positive, laid back coach. The fact that she's a former KU soccer player was also a bonus.

After Thomas' game we headed home just long enough to give away our KU vs. K-State football tickets - a move for which we would later congratulate ourselves - and headed back for Andrew's game. It wasn't his last but his coach decided to take advantage of a warm sunny day for photos. 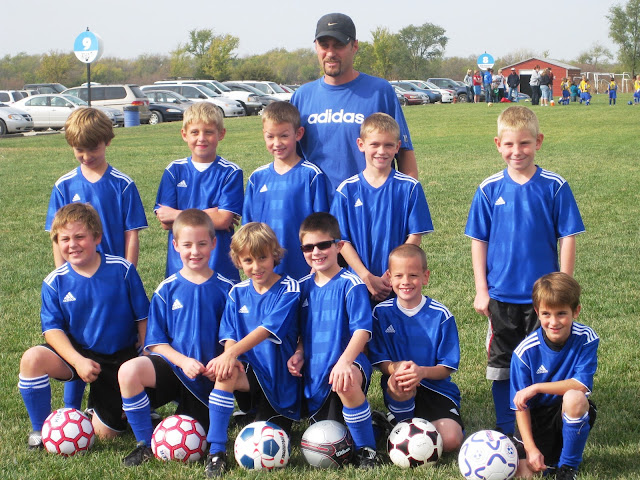 I took about 10 shots of this and another mom distributed hers as well. This is as good as it got for Team Xtreme that day. While they're not all looking at the camera,

I think we can agree that they're all adorable. This is a NICE bunch of kids and a really great coach. 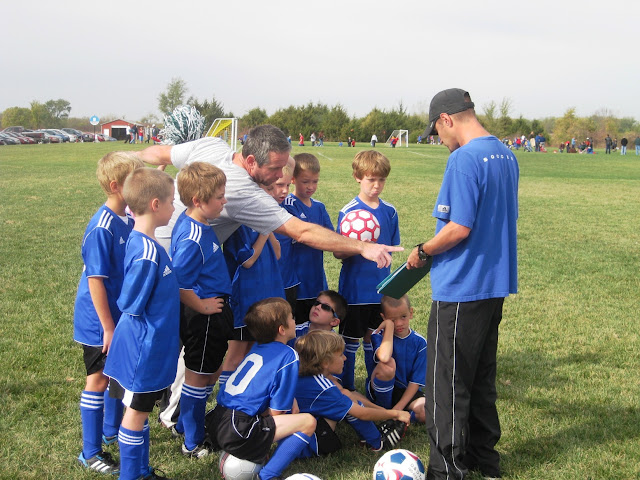 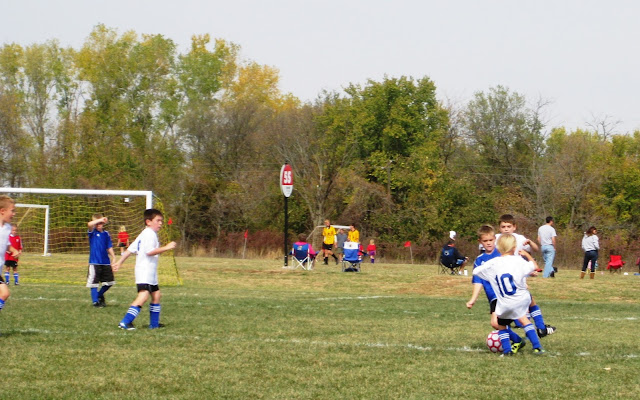 Andrew's on the far right in blue, wrestling over the ball with #10. 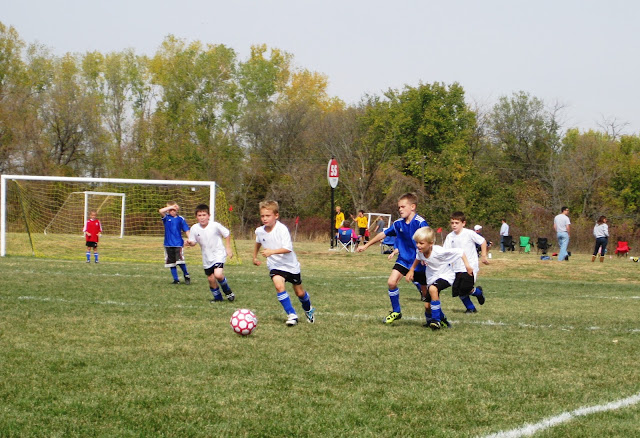 It's moving the right direction. 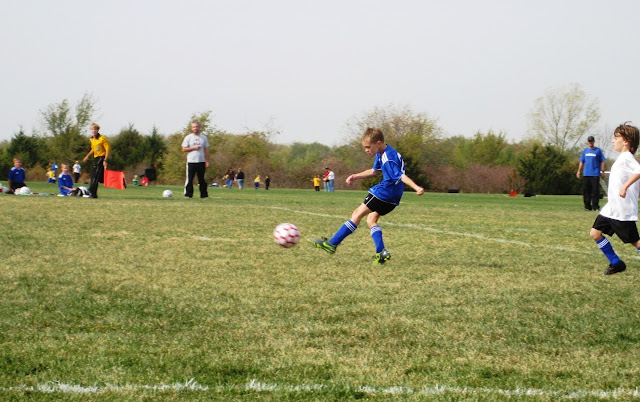 This is the closest I'm going to get to a good action shot with my photography skills. I believe both of his feet are off the ground

right here which brings back concussion nightmares but it all worked out in the end.

On Sunday we ventured to the pumpkin patch with the cousins. The crop is a little thin this year because apparently pumpkins like rain and we've been a little short on that. We had a good time anyway. 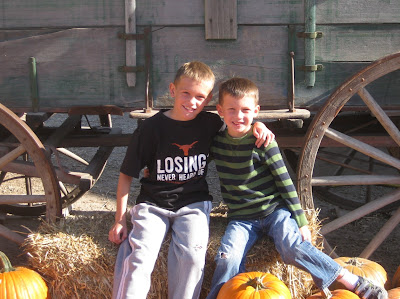 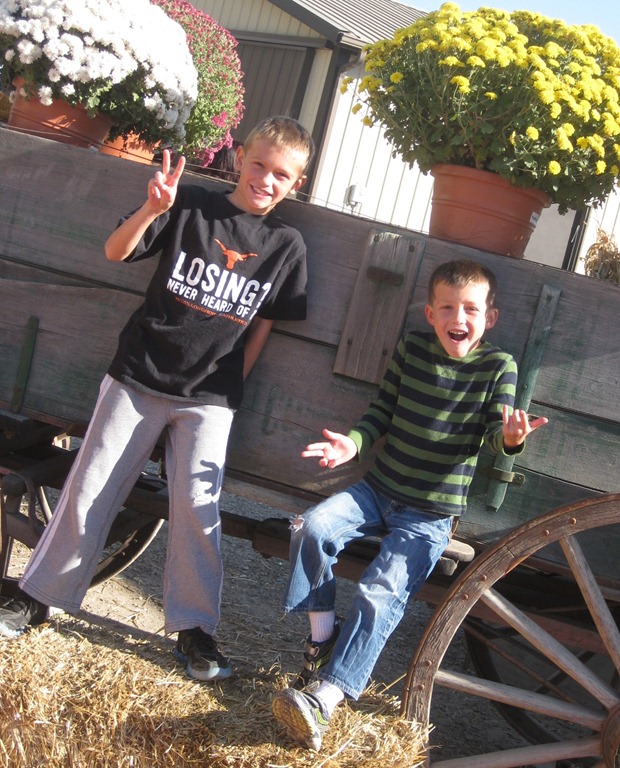 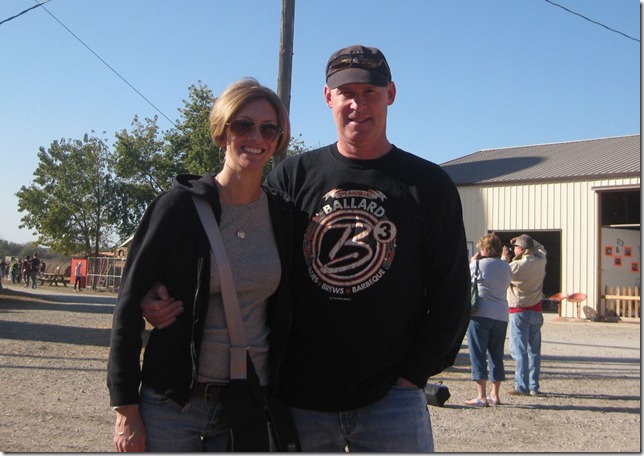 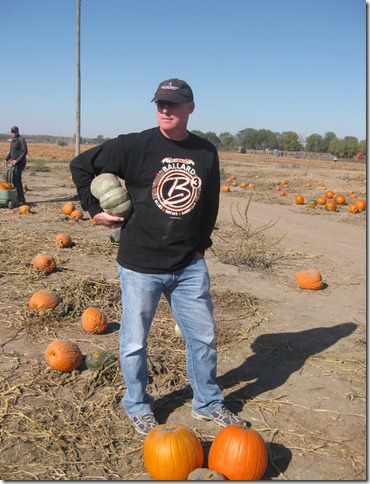 Mark loves the pumpkin patch.  OK. I can’t even type that with a straight face. This is him enduring having Andrew take our picture and then, guarding our pile out in the field. Thomas is a good pumpkin picker and that pile was larger at one point but the pile guard made him make some tough choices. 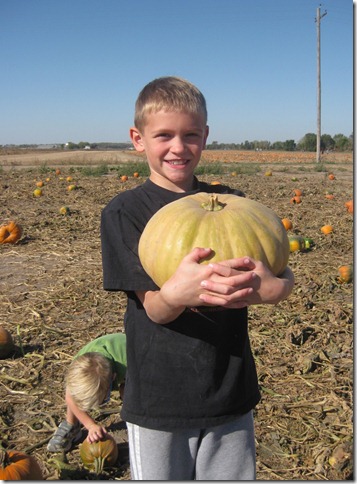 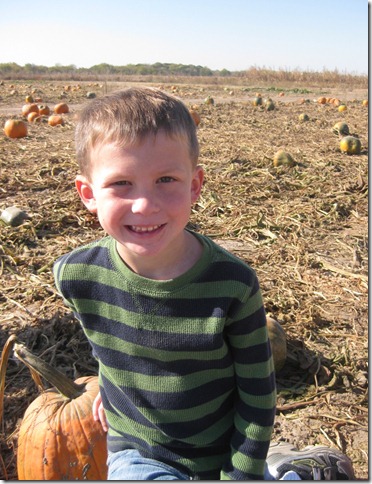 We’ve just tackled a rousing Friday night of soccer practice, basketball practice and a birthday party and tomorrow we’ve got a soccer game and family time on tap with the Rocks. That probably means you can either look forward to another post like this one next week or that I should leave the camera at home. Stay tuned. 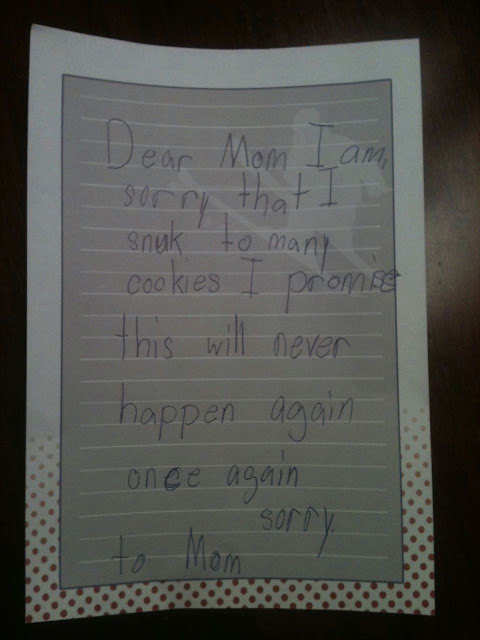