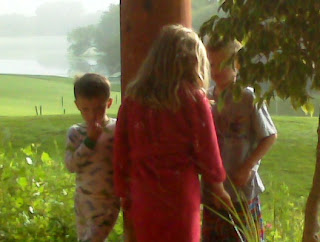 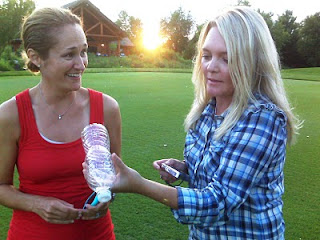 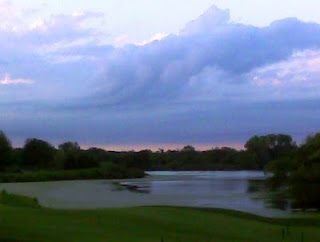 Friends really are, in so many ways, a kind of family you choose.
Posted by Susan 3 comments:

Hello, my name is

We have a new addition to the family here at the House of Hondo. Andrew celebrated a fabulous 7th birthday this week and this little guy was one of his gifts. 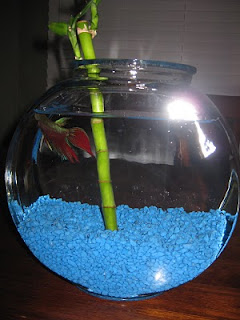 Thomas went with me to  select the actual fish and to choose the rocks for the bottom as a birthday surprise. We of course had to be ready to unveil our new fishy friend within minutes of Andrew's return to the house because there was no way T was going to be able to keep this secret for even a minute longer.

So far, Redtail seems happy in his new home and I can assure you he'll be well fed since they have both already asked twice today if it's time for him to eat.  I only hope the enthusiasm will continue when it's time to clean the bowl.
Posted by Susan 4 comments:

Last night concluded Andrew's rookie season of Parks & Rec. T-Ball. I have to say that six-year-old boys playing t-ball are pretty much adorable. They all look alike with their little bird-like legs, Parks & Rec. issued t-ball jersey and batting helmets. It can be difficult to tell them apart, but gosh darn if they aren't cute. 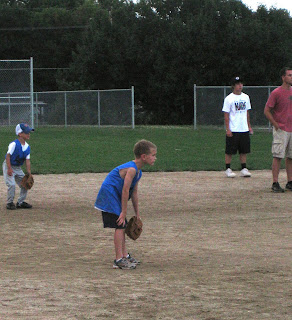 Aside from their common physical appearances, they also display a number of common interests. They all, without exception, love to kick dirt. This is even more fun if you've been asked repeatedly to stop. They also love to spit water. They drink some of it, but a fair amount of it ends up on the ground. They also love to climb fences; backstop fence, outfield fence, neighboring tennis court fence, they're all good.
Andrew has enjoyed t-ball, but I don't think that he's loved t-ball. He loves the batting and running part. He just doesn't really love the standing and waiting part. Playing outfield is decidedly not his pace and he just kind of endures it. He also frequently spaces out and watches birds and talks to his teammates. He has to be frequently reminded by his coaches to open his glove. 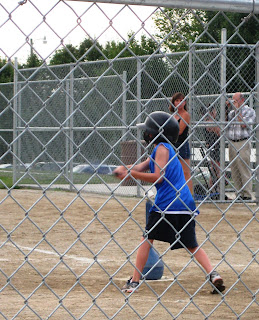 I have learned this season that, in t-ball, the batter has a decided advantage.  The likelihood of the batter making solid contact with the ball is good; it's on a tee after all. The likelihood of the fielding team to ever touch the ball before the batter has rounded first, or even second, is slim. It's more likely that they will be out in left field wrestling each other for the ball. There are no shut-outs in t-ball and there aren't even low scores. It's a homerun derby most nights.
Andrew was particularly squirrely last night. He was guilty of the aforementioned dirt kicking, chant-leading, fence climbing and water spitting all just while waiting to bat in the first inning. And, when I approached the bench to remind him to pay attention to what was happening on the field, he became guilty of talking to me in a cool guy voice to impress his friends that was, well, less than impressive. 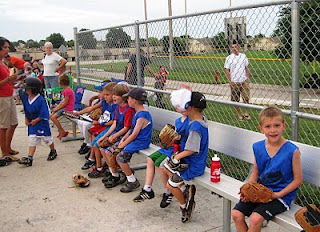 Finally we reached the bottom of the third and final inning and Andrew was sent to field as the "pitcher." Given his antics and general lack of focus I was fearing for his teeth and gritting mine, hoping to high heaven he would at least quit kicking dirt and pretending to pitch long enough to open the glove and feign interest for a few minutes.
Soon after the start of the lineup, he jumped out of nowhere and grabbed the ball and ran to tag someone approaching third. Never mind that his coaches were screaming at him to throw to first. In typical Andrew fashion, he thought he knew better. It worked, but I was kind of mortified that he had blatantly disregarded the yelling of three grown men. 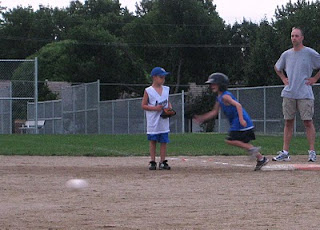 That sets the stage for the collective surprise when, on the next play, he actually fielded a ball and successfully threw it to first without prompting. That's where his teammate - get ready for this - caught it for an out. They did this three times in a row to finish out the inning.  He and his buddy, Jackson the first baseman, couldn't stop congratulating each other.
I'm taking mom license to tell of this feat because I'm certain they couldn't repeat it if they tried and it did shatter some basic tenets of t-ball. In the meantime, he has been able to put his feet back on the ground and I only heard him tell the story once today.
This afternoon I asked him what had been his favorite thing about t-ball. I prompted that maybe it had been running bases, or learning to bat, or learning to play outfield.  Nope. His favorite part he said, without hesitation, was "hanging out" which I'll assume is code for "climbing fences and kicking dirt."
Posted by Susan 3 comments:
Newer Posts Older Posts Home
Subscribe to: Posts (Atom)