Keeping his head above water

Until mid-November of last year, Andrew had sported tubes in his ears pretty much continuously since he was nine-months-old to battle recurrent ear infections. As a result, he had also worn earplugs anytime he was in the shower or bathtub and had never gotten his head wet at a swimming pool. For years we've told him that as soon as he didn't have eartubes anymore he would take swimming lessons. Because he's a boy that just doesn't forget, neither do we and yesterday we made good on the promise.

Andrew began lessons yesterday with our new friend, Dorie. Dorie comes highly recommended by the mothers-of-preschoolers-set around town and now we know what all the hype is about. Andrew has been talking about these impending lessons non-stop for a week and woke up yesterday morning asking what time he would be going to the pool and inquiring as to whether he would wear his swimsuit to school. He was just a bit excited about this.

Now, picture the scene. Thomas and I have been home all day because he has a fever. Because he wasn't 100%, and because I thought Andrew would enjoy this as a 1:1 activity, Mark planned to leave work in time to stay home with Thomas. He ended up detained by a few minutes so Thomas and I loaded up to go get Andrew at school, with the plan that I would bring him back home before Andrew and I went to the pool. Thomas was so excited to "go, go, go" somewhere that when he realized he wasn't invited on the next phase of the journey he was distraught. That was when we decided that we would all go to swimming lessons. It would be a fun family event. Everyone would love it.

Everyone except Thomas. As it turns out, Thomas is terrified of indoor pools. Who knew? After a few attempts to cajole him into enjoying the outing, he and Daddy left and went across the street to hangout until the lesson ended. The good news is that Andrew enjoyed the experience a great deal. His initial enthusiasm and bravado faded a bit when he realized that his new friend Dorie wasn't kidding about wanting him to put his face in the water. I think he thought he was going to get away with just paddling around, holding his head up like a little turtle, but Dorie had another plan and she's done this a few times. 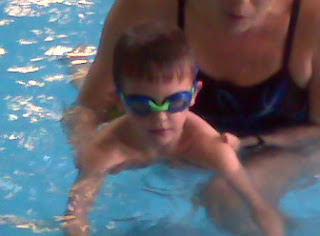 When the lesson first started, you could have bounced a quarter off any part of Andrew's body. He was a little tense. She began by asking him to float on his back, with her helping support him, and he looked like a stick figure. He was all arms and legs and his heels and hands were levitating off the surface of the water. By the end of 20 minutes she had him relaxing on his back, blowing bubbles in the water and gliding in the water with his face down. By the time daddy and Thomas arrived back to pick us up, the revisionist history had already begun and he had, according to him, had a total blast, had trusted Dorie completely and had been swimming like a fish. 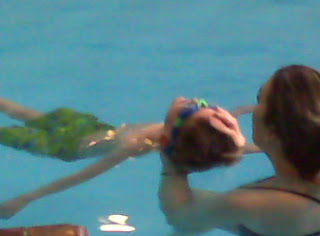 We've got a few more lessons on the books and I hope he's as excited to go back next week as he was when he left yesterday. We're leaving Thomas at school next week.

P.S. Please excuse the low-resolution photos. In the interest of matrimonial harmony I won't blog about the whole story, but our camera was the victim of an unfortunate accident somewhere along I-435 in Kansas City. I've been promised that we'll have a new camera in time for Thomas' birthday later this month but until then I'm reduced to using my phone. I'm smiling, really. It's just through gritted teeth.
Posted by Susan

Makin' his way if he can - temporary layoffs! Good times... Oh, wait, we're not watching old reruns after school. You're blogging! Yay! And Andrew's a fish; when can these boys all play together?!