I'm going to use this forum to take a quick poll. (It shouldn't take long since there are four of you who read...) I'm kind of putting myself out there, but I just really need to know.

I printed and mailed approximately the same number of Christmas cards this holiday as I have in recent years. I did do just a little bit of list pruning because postage isn't going down and neither is the cost to print cards, and I figured there were a few people in our roster who probably wouldn't miss us and some who see us everyday so I figure they don't need a photo. 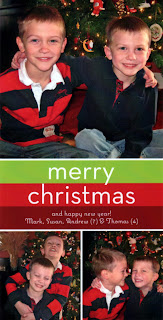 Now we're at December 21 and I have noticed, for sure, that we have apparently been pruned from some lists as well, because we have not received nearly as many cards as we have in years past.  Nor have we received as many as I sent. Hmmmm.
I read this story earlier today and breathed a small sigh of relief.  If writers at Slate are talking about it then perhaps it's not just me?

So, I'm wondering. Is the cost of Christmas card production and delivery getting to folks? Are people concerned about the environmental impact of all that photo paper flying about the country? Does it take too much time?  Is the pressure to capture a photo of your children smiling and clean just too great?

Wait. What? You don't know what I'm talking about and you've received a record number of holiday greetings?


Seriously, people. I want to know. Is it just us? Is it you too? What say you?
Posted by Susan

Susan, as the owner of a local Kansas City business who depends on Christmas cards to make our year, here are my thoughts. We have seen a huge decline. Seems as if customers are maybe only sending cards once every few years - i.e. they had a big wedding in the family. And obviously, we have lost a lot of business to the Snapfish's, Shutterfly's and Tiny Prints of the world. From an environmental perspective - that photopaper is bad, we have some great choices in the shop from some vendors, who print digital photo cards, but at least use 100% recycled paper or 100% cotton or bamboo paper. So that helps. I honestly, will never tire of the mailed Christmas card. I am sure it is slowly dying and that makes me sad. If that goes, I am sure the thank you note is not far behind. So I say, keep sending the cards. It is only once a year, and doesn't coming home to a mailbox full of pictures of family and friends make it all worth it. Facebook will never replace that.

Our/My record is consistent: 0 cards sent. Always (so far) more than 1 received. And we/I enjoy and treasure every one.

"Deck the halls with postage greetings"...though I notice an increasing number of email Holiday messages.

Think we may have received a few less than previous years, but not a lot less. I, personally, love receiving especially the photo cards and the newsletter ones, because so often that is the only time I hear from friends who we have known through the years but who lead busy lives. The only cards I do NOT like receiving are those generic cards with nothing but a signature--definitely a waste of trees, in my opinion! Yes, Facebook does allow one to sort of keep up with others, but most folks who are my "friends" don't really post a lot of personal stories, so the newsletters give new information and the photos are usually ones I haven't seen on Facebook! So I hope the Christmas Card Tradition never dies--even once a year contact with folks, some of whom I have known almost all my life and are scattered all over the world, is very welcome and appreciated here!

We are down a few cards but not many. I have pruned our list
over the years, too. The ones we haven't heard from are mostly very busy relatives with pre-teen/teen-agers--probably too big for the "cute kids" photographs but too busy for the "cute family" pictures. I agree with Sharon that I like to get a photo and/or note or letter. Anyone is free to scan or skip a letter if they choose (but I'll bet NO Christmas letter ever went totally unread.) Anything sent through the mail shouts that the sender thought about US as individuals rather than just posting something for the masses to seek out. And don't get me started on the loss of the thank-you note in our society. But I also understand that the cost of the US Mail has sky-rocketed. (And why does Google keep forgetting my identity and I resort to replying as "Anonymous"?!) Mom

I think I've received & sent about the same number this year as I did in '09. I, personally, love getting mail other than "junk" - & have been looking forward to checking the mailbox every day during this season. I also tend to keep the photo cards & other fun ones around for several years stashed away in my Christmas decor. Even the generic ones are ok...as long as there is a note with them, and I'll cut off the front of the card and reuse it as a gift tag sometimes. So...perhaps a little less wasteful?

I have been CCA (Christmas Card Absent) the last 4 years so I always expect to get less and less each year I don't send them. However, watch you mailbox, I'm sending some out soon! I think people just get really busy and when they need to get rid of something, the cards go. I LOVE getting photos and letters from all my friends and family--even my parents, and I usually half write theirs! Keep the faith--you may be getting New Year's cards, Feast of the Three Wisemen or Groundhog Day cards in their place this year. No way is that people would prune you guys---your The Hondos...everybody loves you, girls want to be you! :) (ps--my word verification is out fat, which happens to also be my 2011 plan!)

We've gotten a lot of nice cards, but not as many as usual. We're seeing more family cards with pictures & brief notes, fewer generic cards, fewer Christmas letters about the family's year, and more emailed Christmas letters. I LOVE getting all of them because I reread them and study the pictures. Yes, I do think Facebook makes a difference because some people are connecting with others all the time. Email in general also makes a difference because more people are in fairly constant contact. In the rush of our hectic lives, the personal notes are going by the wayside. But I treasure the electronic connections with some people I haven't seen in 50 years, or one to two years, or 4 months, or yesterday. We save all of our cards - I know, I know, can't you just hear Butch's opinion about that - but they are a treasure trove of relationships through all the years.

I have slightly pruned our list, too, and I also get fewer cards. Many come just about Christmas Day, so I don't start counting until New Year's.

I think that people who see my photos on my blog and on Facebook every week don't need a family photo (and the fact that my kids are grown and don't change too much each year) contributes to this pruning.

I still LOVE getting cards/photos/letters in the mail, though.

(Charlotte - a Claremont UCC person who is not really stalking you! just ask Rosemary....)

I was just thinking about this yesterday! We definitely have been removed from many people's lists. I do know that some people did a digital Christmas card on Facebook. I am bummed because I hang mine up on a post in my house for all to see.

Our New Year's/change of address card is forthcoming…we'll make sure to keep you on the list :)

We definitely received less this year as well. I personally think that if I can find the time to send out Christmas cards then everyone else can too ha! Postage does stink but you can get 50 cards at Costco for 14.99, which means there really is no excuse (unless you don't want to pay the membership fee and then maybe you have an excuse!)Your card was super cute and we really enjoy getting them!