I'm on a mission right now. My mission is to complete my holiday shopping, wrapping, mailing and card sending in a timely manner so that I can enjoy these next few weeks at a leisurely pace rather than at breakneck speed. I've never been one for holiday shopping in October but I've tried to turn over a new holly leaf this year. To that end, I spent this evening addressing Christmas cards with some help from T. (It's amazing how it doesn't even bother me anymore that a rockin' Friday night these days includes Applebee's takeout and arts & crafts.)

He started out just coloring nearby. After a few minutes he began politely asking to use one of my new pens that I purchased specifically for card-addressing. Of course I conceded and soon enough he was using the red pen and had pilfered one of my envelopes because "me sending cards too."


I got busy with my overly-complicated system of addressing, labeling, stuffing, sealing and stamping and sort of lost track of what he was doing. Not surprisingly, however, he was paying careful attention to my work. This was his product: 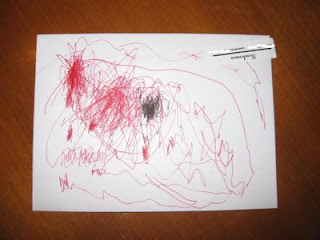 He proudly told me that it was his letter to Santa, (That would be the one he's been un-interested in talking about to date) and that it says he wants a trumpet for Christmas. That's pretty clear communication from our speech therapy patient! You'll notice that he even added a return address label. It's doubling as a stamp, but still. That's a pretty good effort.


While all this letter writing was happening, Andrew was totally absorbed in watching The Grinch on television. We've got two believers this year and they're about to make me a convert.
Posted by Susan