The beard was real

As previously mentioned, our boys seem to be at the perfect age this year to just soak up the holiday season like true believers. We're reading Christmas books, checking our advent box each evening, wrapping and stamping and just generally tying everything with bows around here.

Yesterday we made a trip downtown to visit Santa, who was making a guest appearance at Weaver's. Weaver's is a 150(+)-year-old, family-owned department store that still has a great housewares section and the only real cosmetic counters in town. It's just one of those quintessential places that's the perfect locale for a Saturday chat with the bearded one. We arrived a few minutes before noon and staked our place in the line that was, in true downtown fashion, sort-of starting to form. There's no rope, no starting place, just nice people hanging around politely waiting their turn.
The boys were third in line and they marched right up and talked with Mr. Claus as if they did it everyday. Andrew shared that he would like a toy skateboard ramp, a tent and a Texas Longhorns football helmet, which is exactly what his letter he wrote three weeks ago indicated. The only addition was Pokemon cards, which Santa still needs to procure. Thomas looked him right in the eye and - in true Thomas fashion - said, "TUMPET, peese." 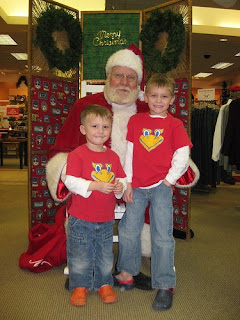 With that we took their picture with him then Santa produced a candy cane for each of them, which was far more delightful than getting to tell him about their lists. Andrew later reported that the thing that surprised him most about the visit was that Santa had candy. Simple pleasures.
Posted by Susan

Hey, he's a pretty good looking Santa! You should have seen the sweet, little ole Santa my boys visited this year...I was a little concerned that he was going to drop Cooper!

Oh my. great post. such a wonderful americana moment.