Is it wrong to love something so much?

Since I've last posted I believe our nation has elected a new President and we here at House Henderson have new lights. I know that most of America is still talking about the Obamas and wondering how Barack's security briefings are rolling and whether they're going to choose a poodle or a rescue dog, but really, people, have I mentioned I have new lights?

Of course, there's a knock-knock joke in all of our recent home updating and it starts off something like, "How many holes does it take to install one recessed light?" From there it unravels into one of Andrew's jokes where the punchline is a little difficult to decipher but goes something like, "a whole heck of a lot and it costs three times what you anticipated to and takes three times as long." We're still not quite finished but we're within sight so for now I'm posting the mid-process shot. 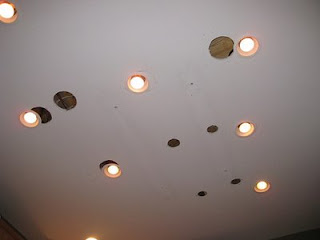 I know you're now riveted and will be waiting for the true "after" shots because it's fascinating to look at photos of someone else's ceiling and also because, seriously, how far off course could a project go to have required so. many. holes.

In addition to the lighting in the kitchen and entry, I have long-coveted new kitchen appliances. After some discussion and some seriously depressing Morgan Stanley statements I decided it wasn't prudent to move ahead with new appliances right now and that just the lights would be plenty to absorb six weeks before Christmas. I decided that I didn't want a new fridge until we could do all new appliances at the same time. I was kind of at peace with the ugly refrigerator with no ice maker. That's of course the cue for the 1980's-era Amana to begin a slow death. For a few days we were in denial, then we just decided we could live without the top shelf because it seemed to be the only one not cooling. It went south from there and we ended up with an emergency fridge purchase on the books, too.

It doesn't match anything else in the kitchen and it wasn't planned but let me just tell you it's a thing of beauty and I never, ever imagined that I could be so pleased with a new appliance. This life I'm leading is SO GLAMOROUS! With that said, part of the reason I've been slow in posting recently is that I'm pretty busy each evening with the new fridge. I'll update again soon once the lights are complete. Until then I've got condiments to rearrange in the door bins and fake stainless steel to caress.

ETA: My husband has let me know that he doesn't feel as though it was fair of me to have originally said in this post that he was the one who put the kibosh on buying all new appliances so I have edited this post to more accurately reflect our joint decision making. :-)

Hooray! A new entry chandelier, new kitchen lights, and a new fridge! You must be in hog heaven. How great that you're getting all of this. Couldn't happen to a nicer family. P.S. I think I'd take a lot of shots of the ceiling as it is, develop a selected blurry image, and post it on a UFO sight.

YAY! THese are significant life improvements, even if they are not coming at the best economic time. Joy in the small things, you know? And really. That's a LOT of holes in a ceiling! Highly entertaining.