For ages five and older

For a mere $1.49 at Target, you can purchase a Dudley's egg dying kit. It contains nine color tablets, four egg wraps, stickers, a clear wax crayon and the box conveniently transforms into an egg holder. It's a darn good deal.

The box clearly says, "for ages 5 and older" on the outside. I noticed that as I read the directions this evening. I lingered on that advice for an extra second, but come on...pssshaw. Lots of kids way younger than five dye Easter eggs. Right?
Thomas helped spread out newspapers and both boys waited at the table impatiently while I filled the cups with water. Then 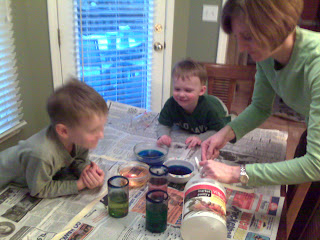 , we dropped the color tablets in the water and you could almost read their little minds. "What's the big deal here. Nothing's happening." That's when I got to play Mr. Wizard by adding the magic ingredient. Thomas graced us with his full-body chuckle with each teaspoonful of vinegar poured and Andrew said "oooh" and "aaah" as if on cue. We were in business.
Andrew gets the whole egg coloring concept and, just like at Christmas, is at the perfect age to really get into all these odd traditions we've paired up with religious holidays. He carefully dipped his eggs and was willing to wait for them to fully soak-up whatever color he was working toward. He even took suggestions graciously and let me help him when he really needed it.
Thomas, not so much. Thomas was on the do-it-yourself-pl 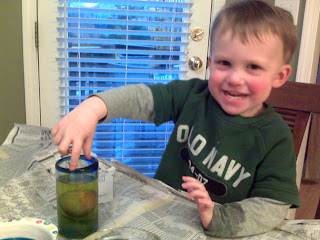 an tonight. Egg dippers? For sissies. Real men use their fingers. Just one or two carefully selected colors per egg? For wimps. Real men rapidly transfer their egg from one cup to the next as quickly as possible. Egg dye splashing? That's why we spread out the newspaper. And, why is everyone getting all upset and rushing for paper towels? Isn't that why we own stock in Shout Gel?
We started with an even dozen eggs and after just one casualty, ended our extravaganza with 11. Not bad. That 11th egg got a lot of love, as Thomas was unwilling to stop with the decorating. It saw a little action in every single color multiple times and he was the last person at the table by 10 minutes. I finally took pity on the egg and our kitchen table and we called it a night. His hands are still orange, even after a long bath, and his shirt and mine might never be the same, but Easter comes but once a year and our finished products look great! 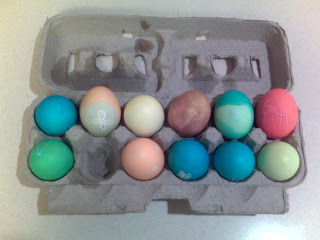 Happy Easter Egg time! Could the brownish one in the middle be Thomas's? I love all the colors, Andrew. RoRo is sending you all something for Easter. Watch the mail for a special arrival. Love, RoRo & Butch